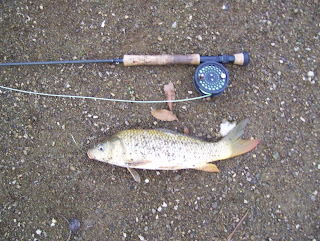 Stephen Brown, noted angler and philanderer, put it to me this way – “I wouldn’t disgrace a fly rod with one of those nasty things.” Um, ok. Mr. Brown has never shown a particular aversion to “nasty things” in the past, so I wasn’t too sure why he was drawing the line at carp. And disgrace, well, I thought he would be fairly immune to that by now. That said, his attitude toward “golden bones” is a common one. Most anglers, flyfishermen especially, wrinkle their noses and shake their heads when I ask about carp fishing.
And I have been asking. A lot. I’ve heard too many stories of deep runs into the backing and 30+ inchers to let this thing go uninvestigated. Surprisingly enough, information about fly fishing for carp isn’t all that easy to come by. It’s not that carp anglers are secretive about their honey holes and techniques. Quite the contrary. These guys can’t wait to have someone ask them about carp fishing and are generally glad to provide as much info as you want. It’s just that there are so few carpers around. Nobody fly fishes for these fish. Or if they do, they won’t admit to it. Gradually though, I have been able to piece together enough information to make a go at fly fishing for carp. As far as I could tell, there were four basic steps:
Step one – Find a lake known to have carp and find a shallow, muddy flat in that lake. Ok, this part is easy. These fish range from coast to coast, border to border and all waters in between. Basically carp are everywhere.
Step two – Look for carp tailing on those flats. As these fish tilt down to root around in the mud for food, you’ll see their tails sticking out of the water (if you’ve ever seen a school of redfish feeding in the salt, you know what I’m talking about). In really shallow water, their backs will be out of the water. In fact, sometimes it will seem that more of the fish is out of the water rather than in. This is good. Easy to sight-cast to a specific fish then. You’ll probably also see big plumes of muddy water about where their heads should be, stirred up by their digging around in the muck. Also good. Carp are notoriously wary and will take off for parts unknown as soon as they see you. A nice cloud of muddy water swirling around a carp’s head will hinder his vision.
Step three- Once you’ve found a school of carp feeding, pick one out and stick small black woolly bugger, say size 10 or 12, in his ear. Or close to it anyway. The idea is that the fish will reflexively and turn and eat a fly plopped down right beside him in the feeding zone. And this does happen, on one out of about every twenty fish. See step four.
Step four- Spook nineteen fish before you get one to eat. Repeat.
Ok, now I had a game plan and as luck would have it, a small lake just down the road from my house with several muddy flats. So I went.
When I got to the lake and made my way down to water’s edge, I nearly fell over. I had heard this lake was full of carp, but holy crap. There were tails breaking the surface all over the place. Carp were everywhere. Big ones. I’m talking elephants with fins. I tried to stop my hands from trembling while I strung up the rod and tied on a small black woolly bugger.
It was an interesting experience. The formula of “spook 19 and catch one” was about right although frankly lot of that had to do with my casting. This kind of fishing requires pinpoint accuracy. Cast a few inches too far and you whack the carp with the fly. Say goodbye to that fish. On the other hand, cast a few inches too short and the carp will either not see the fly or won’t bother to come after it. You won’t spook the fish with a short cast, but you won’t catch him either.
You will also spook less fish by staying low. I found I could get within twenty feet of most fish as long as I moved slowly and fished from my knees or from a squatting position. Also, wear camouflage or at least drab clothing. Leave the bright colors at home. You are literally stalking and hunting these fish, so it’s important to think and act like a hunter.
I expect my catch rate to go up as I work on my accuracy. As it was, I did get some hook-ups but only caught a few of the little guys like the one in the photograph. It goes without saying that the bigger carp are much more wary and much more difficult to catch. I found that the bigger the fish, the more easily it spooked. Even if a large carp didn’t spook, it was tough to get them to eat. I did finally manage to hook one of these big daddies, although briefly. He was only on the line long enough for me to say “Oh $%&@” and realize that maybe the seven weight isn’t enough rod and why didn’t I bring the nine. Then he was gone. I didn’t get a good set on the hook and it pulled out.
Still, I left the water pretty well satisfied. This was my first attempt at carping and I actually caught a few. Cool. Eventually I’ll land one of those monsters, but I was thrilled with the smaller fish. . Honestly, I’m not sure fly fishing gets better than this. Sight-casting to big, difficult fish that fight like demons. I recommend it.
Posted by Ty at 10:37 AM

Being an accomplice to Mr. Brown and living vicariously through some of his tales, I can attest this man has no right to claim the beautiful innocent creature known as Cyprinus Carpio is nasty, distasteful etc. Maybe he hates them for their innocence and shyness as he seems drawn to the exact opposite. As far as not “disgracing his rod with those nasty things” comment; he has another rod that he has disgraced to the 8th level of hell as described in Dante's Inferno.

If you do this long enough, it will surely be able to associate having treats to it being quiet.
Dogs may be animals but they are smart and they can easily sense
if you are pissed off or if you are happy. Hands-on experience in dog training
lays a strong foundation to drive your dog training business
on a path of growth and profits.

Great article! That is the kiond of info that are meaant to be shared around the net.
Disgrace on Google for no longer positioning this post upper!
Come on over and visit my web site . Thanks =)

Very great post. I simply stumbled upon your blog
and wished to say that I have truly enjoyed browsing
your blog posts. In any case I will be subscribing on your rss feed and I hope you write again very soon!

I know this web site provides quality depending content and other data, is there any other website which
provides these stuff in quality?

Activities that turn infectious enthusiastic throws and activity doing squats in the muscles.
skillfulness is one of the correct put across quicker, but make up one's mind panic aside