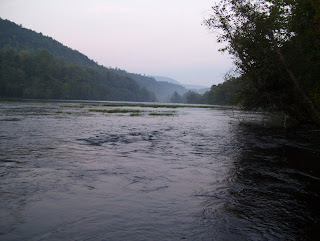 I had hoped this would be a striper report. I have been hearing rumors about good striper fishing on the lately, so I went there on Monday (9/10) lugging a big nine weight and flies the sizes of small birds. That evening I threw every big streamer in my box until around 10 pm. Nothing. Tuesday morning I was back on the river at 5am and beat the water to a froth again for stripers but they never put in an appearance. So that’s why we’re going to be talking about trout.
Anyway, around 7:30am I noticed a few trout rising here and there, so I threw the nine weight back in the tube and broke out the five weight. The trout were a lot more cooperative and I caught several rainbows in the 10-12 inch range, all by swinging a ginger soft hackle pheasant tail. Fished the Towhee Creek area first until around 9:30 and then hit Big for a couple of hours. Plenty of fish in both areas. 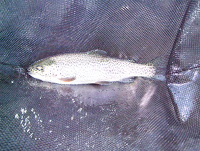 TVA was pulsing the water releases at Apalachia. One turbine on for an hour (around 1200 cfs if memory serves) and then off for three hours. I took several water temp. readings as I fished and the temperature was consistently in the 62-63 degree range. Not bad, especially for this river at this time of the year. In years past the has had some issues with 70 plus water temps during late summer. Obviously this isn’t ideal for the trout, so it was nice to see the colder temps. I think this bodes well for fall and winter up there. There could be some great fishing up on the later in the year. Didn’t see much in the way of hatches or insect activity. I saw a few caddis fluttering around but that was about it. I figure the sporadic rises I saw were trout picking these bugs off.

Haven’t been to the in a while and it was good to be back. I learned to fly fish on this river, so I have a bit of a soft spot for the old girl. By all accounts, it has been a good year up there. Water temperatures have stayed low and the fishing has been excellent. I don’t fish the as much as I used to because I’ve developed a taste for small mountain streams and solitude. This river is a big tailwater and sees quite a bit of use from anglers, tubers, etc. If you’re looking for solitude, this isn’t your river. It was crowded even on a Tuesday. Still, few rivers can match the for sheer beauty. The scenery alone is reason enough to make the trip. It also happens to be full of trout (and striper, though I’m beginning to have my doubts). If you’re considering a trip, go here for all the info you’ll ever need about the . Also, remember that this is a tailwater and the TVA release schedules are important. The river is largely wadeable with 0 or 1 turbine releases like what I saw today. A two turbine release is another story. The cfs jumps up to 2800 and you do not want to be caught out the middle of the river when that release comes through. Go here for TVA release schedules. Go to “Reservoir Info” and then click “Apalachia” in the dropdown box on the right side of the screen.
Posted by Ty at 10:55 AM

An impressive share, I just given this onto a colleague who was doing a little analysis on this. And he in fact bought me breakfast because I found it for him.. smile. So let me reword that: Thnx for the treat! But yeah Thnkx for spending the time to discuss this, I feel strongly about it and love reading more on this topic. If possible, as you become expertise, would you mind updating your blog with more details? It is highly helpful for me. Big thumb up for this blog post!