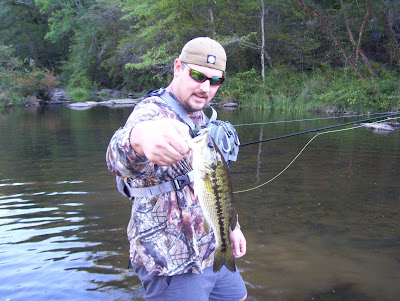 Well, it wasn’t easy to walk past all of that trout water without at least making a cast or two. This river is after all known as one of the better trout fisheries in east and we have spent many, many fine days here. But we weren’t here for trout today. We had decided to instead chase down some rumors we have heard over the years about another, more remote section of this stream that supposedly holds nice populations of smallmouth and spotted bass.

Basically, it was said, if you were willing to hike a little further, to wade through brambles, climb in and out of ravines, if you were willing to brave the occasional snake and yellow jacket nest – then you would be rewarded with some excellent bass fishing. Good enough for us. We ignored the pods of rising trout and headed into the backcountry.

After a bit of a hike and some hand-to-hand combat with thick brush, we finally hit the water around 2pm. It was sunny and hot with an air temp around 80 degrees. The water was low, gin clear and nearly 80 degrees itself if the thermometer was to be believed. We got readings of 77 – 78 degrees, but the water felt cooler than that.

We hooked a couple of smallmouth right off the bat by deaddrifting big dry flies. And I mean big. We were throwing size 8 and up. Tarantulas, deer hair bugs, huge Hex dries – things like that. Anyway, picked up those two fish and then had some pretty slow fishing for the next couple of hours. We caught a fe 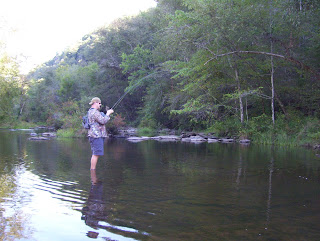 w bluegill here and there, as well as a couple of redeye and spotted bass. We stayed with the same approach most of the afternoon. That is, casting upstream with long leaders and deaddrifting dries. It seemed like the only way to get at these fish in the extremely clear, skinny water. We still spooked a lot of fish as it was, including some very nice bass.

Then Geoff began stripping his fly along the surface and found that the fish liked it. He landed the largest bass of the day, a beautifully colored spot. I started stripping the fly as well and immediately hooked a fat smallie. We picked up few more small fish over the last hour before we called it quits. We got strikes as long as we kept the fly moving.
All in all a great day. Caught quite a few fish, including some nice bass. Also spooked a lot of fish despite our best efforts at stealth. The stories are true – this part of the river is loaded with bass. But that doesn’t mean they can be caught. At least not without some effort. These are fish that hang out all day in clear, clear water less than a foot deep. They are quick to spot trouble (you) and scurry to cover and/or deeper water the second they sense anything out of the ord 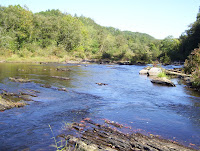 inary. It was some fun stuff and we were glad we took the time to check the stories and rumors out. And bottom line is that it’s usually worth it to investigate a rumor or two during the year. Yeah, there’s some risk to that. It's entirely possible to spend a whole day trying to sniff out some piece of water you heard about or saw on a map and completely crap out, catching nothing or maybe even finding the water unfishable. Every now and then, though, the extra effort pays off and you find a gem like we did today. We had great fishing and better yet, we had it all to ourselves. The trout water on this river can get pretty crowded. Back here in the dingles though, we didn’t see another soul with the exception of a couple of hikers passing through. We'll be back.
Posted by Ty at 9:55 PM

I think I know where this is too! I haven't fished this section of river X yet, but I've read about it. I have wasted some time in the trout water downstream... probably one of the few places where the fishery changes from bass to trout downstream without a reservoir in between. If I had known at the time... I probably would have hiked and fished for the bass.

I've just installed iStripper, so I can watch the hottest virtual strippers on my desktop.

By taking http://community.norton.com/en/users/caramenggugurkankandungan the time to read a lot of information like this to add my insight . http://www.flipsnack.com/caramenggugurkanhamilprofile/