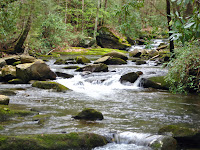 We arrived on Thursday and set up camp as fast as possible. Soon as we had claimed our spot and set up house for the next three days we took out for the "new to us", now known as Broken Wrist Creek. I had a guide trip on Friday that Ty talked me into taking and I was planning to take the guys up there to chase wild trout provided it was productive and easy for those that aren't experienced on small streams. As we hoped the water turned out to be very productive and somewhat easy to wade albeit some very slick rocks. The fish there were hands down the prettiest fish I have ever seen around the Tellico Basin area.

The Friday guide trip was a success! These gentleman were more used to nymph/streamer 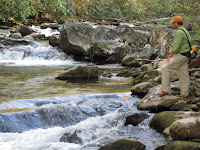 fishing out of drift boats on big tail waters but after a while they warmed up to the small stream fishing experience. I managed to dial in their casts and put them on some fish and as the day grew longer one gentleman grew more excited to hooking into these native wild TN bows on dry flies not to mention take in the scenery. As for the other gentleman he seemed to not see the beauty in these fish and the place these fish reside. Its a shame to me that some people will walk through life demanding instant gratification and never stopping to appreciate the things that God 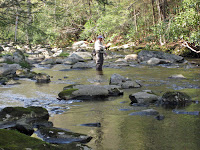 created for us to enjoy.

Saturday about 3am some thunder storms rolled in and after we packed up all the wet gear we headed back up to the creek to see how it was after a good down pour. We were able to pick up some fish here and there but as the day grew longer the fishing got better. As like most trips like this someone manages to join a swim team and this particular time the trout gods chose me. I managed to slip and fall & mess my wrist up pretty good - hence the title of this report. At this point we called it a day as I basically couldn't move the darned thing - thank God 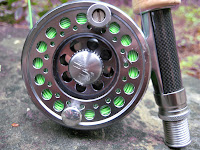 it isn't broken, only sprained. It was one of those falls we all will eventually take where we think we have good footing but the very next second we find our back sides soaked to the bone and we know we just barely missed killing ourselves by knocking ourselves out and drowning however, the first thing we think of after we had our brush with death is, "God please don’t let my rod be broken." It's pretty simple actually; we will give ourselves up to keep that graphite stick out of harms way. The fall also put to the test the FFB Deschutes 1 fly reel Ty reviewed a few months back. As you can see the reel took a little abuse and still works like nothing ever happened. Personally I like the newly added beauty marks! I'll add this too; driving a stick shift with a jacked up right wrist isn’t exactly riding the tea cups @ Disney. That sucker throbbed for 2 hours as if it were begging me for ice!

On a more positive note I was able to play with the camera a little and take some nice pics to post. I have to say it’s always nice to be up on the rivers in the early spring when the fish are taking dry flies, the fauna starts to bloom and you manage to spot a Narceus Millipeade and snap a shot of a Quill Gordon.
Trout don’t live in ugly places........ 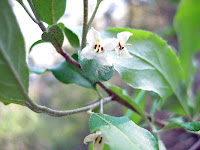 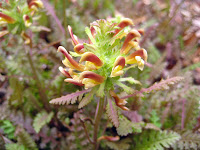 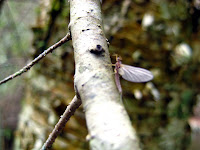 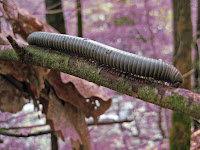