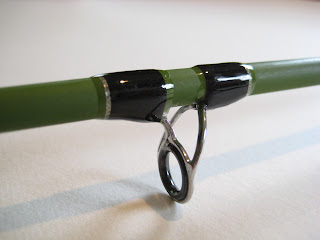 Well, this is our third review of Fly Fishing Benefactors equipment. Carl, the owner of FFB, has been brave enough to send us his products and we’ve been doing our best to wear them out. As far as this review goes, I’m going to go ahead and warn you – their Shenandoah 8’ 3”, 3 / 4 weight rod is probably the best of the bunch. As much as I tried to avoid it, there’s a bit of gushing here. This is a cool little fly rod and we’ve been fishing and casting the absolute crap out of it.
I liked the Shenandoah right out of the tube before I threw the first cast with it. This rod has a flat olive finish with black wraps and I’m a fan of a flat finish on rods. I think it looks better and, from a practical standpoint, many small stream anglers believe that the flat finish is less likely than a shiny finish to spook fish. (One very well known angler and casting instructor regularly paints his rods with matte paint for this very reason. He is of course clearly insane.) Anyway, the flat olive finish gives the Shenandoah a natural, almost reedy look. In fact, we started calling it the Willow Stick. As in,

“I think I’ll use the Willow Stick today.”

“No way. You used it last time. Let me have a go with it.”
“Damn.”
The Shenandoah is a great looking rod and a bit different from anything else you’ll see out there on the market.

Enough about that, though. On to the casting field. It didn’t take many casts to figure out that this is a fast, fast rod. The rod is described on the FFB web site as medium fast, but I would definitely categorize it as fast to very fast. To see just how fast, we did a few measurements on the Shenandoah and found that it has an action angle of around 72 and an ERN of 4.75. Whoa. This is a quick powerful 3 / 4 weight. Guess I’d call it a “big” 4 weight for lack of a better term. (And by the way, if you don’t know about action angles and ERNs, go here.)

To give you an idea of the juice this rod has, take a look at some distance numbers I just got a few minutes ago. While writing this review, I realized that although I’ve been casting and fishing with this rod for months now, I’ve never tested it against the measuring tape. So I took a break from writing, unrolled the tape in the front yard and lined the Willow Stick up with WF4F line. It was late and getting dark, so I only had time for a few hasty casts, only three of which were true attempts at hitting a decent distance. The numbers on those three attempts were 74 ft., 74 ft., and 79 ft. Not too shabby for a 3 / 4 weight.

I know, I know. Who needs a four weight that casts into the next time zone? But think about this – a rod that can make a poke out to 70 or 80 feet will have the backbone to cast 30 or 40 feet into the teeth of even stout winds. I have used the Shenandoah in some very windy conditions and found that it could punch a woolly bugger into a stiff breeze with no problem.

And about this “fast” thing. If you don’t like tip flex or fast rods, this probably isn’t your rod. Or maybe it is your rod and you just need to upline it a weight or two. I have fished the Shenandoah with 5 weight and 6 weight lines, which did slow the rod down and give it the feel of a mid flex rod. Personally, I like the light, crisp feel this rod has when lined up with 4 weight line. But others may feel differently and I would say to those folks – don’t hesitate to overline this rod if you need to. I bring this up because I suspect there are going to be some anglers out there who see this rod and really take a liking to it on looks alone as I did. Like I said before, this is a unique rod and there isn’t really anything out there like it. Anyway, I also suspect a few of these same anglers will cast the rod and find that it’s too fast for them. So I’ll say it again, overline the thing and see how it casts for you then.

As for the nuts and bolts, the hardware and construction of the rod was fairly typical. The rod blank itself is, per the FFB web site, “IM-8, 45 Ton modulus carbon” lined with eight stainless steel snake guides along its length. The stripping guide is a tad on the small side as far as my personal preference, but smaller stripping guides aren’t unusual on rods of this weight. The Shenandoah also sports a nice walnut uplocking reel seat and an Ultra Fine grip made from AAA grade Portuguese cork. And I think the grip deserves some extra attention here. The cork grip on the Shenandoah is pretty standard stuff except for one thing – it’s bigger in diameter than what you usually see on these smaller weight rods. I’ve heard people complain for years about small cork grips on lower weight rods, but never thought much about it. In fact, I thought these folks were whining about nothing. Then I cast the Shenandoah with its larger grip and sure enough there is a significant difference. That larger grip is just plain more comfortable, especially if you have big meathooks for hands. I’m not sure if Carl and the folks at FFB put this larger grip on the Shenandoah with this in mind, but it’s definitely a plus in my book. And one other plus, the Shenandoah is a three piece. I much prefer three and four piece rods for travel.

Any negatives? Not really. There were a few small blemishes in the finish of the rod. These didn’t affect the performance of the rod and frankly weren’t significant enough to bother me. That said, I do know a few anglers who can be downright neurotic about that sort of thing so I figure I should mention it.
The Shenandoah retails for 129.00, a reasonable price by any standard for a quality rod. FFB also has a pretty good warranty system set up for their products, which is always an important consideration. You can go here to check out the Shenandoah and the rest of the gear on the FFB web site.

Truth be told, the Shenandoah has become a bit of a “go-to” rod for me. When I head out to fish some of my favorite large mountain streams like the Tellico or Little River, or even a big tailwater like the , I pull the Shenandoah out of the rod rack more often than not and leave my other rods at home. I just like fishing with this thing.

So Carl, I guess we probably need to keep this rod a little longer for more “research”. Several more years ought to do it. Hope you understand.
Posted by Ty at 12:30 AM

I've just installed iStripper, and now I enjoy having the best virtual strippers on my taskbar.