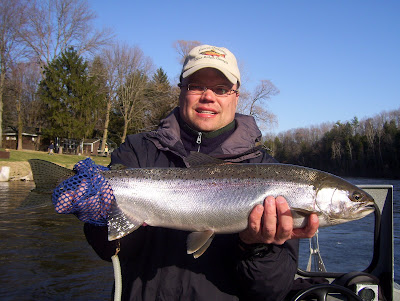 Ok, so I lied. I said a couple of posts back that bass rule. And they do - unless we're talking about steelhead. In which case the steelies rule and bass take a back seat. Even striped bass. Maybe. Anyway, had my first taste of steelhead fishing a couple of days ago on the Muskegon river in western Michigan. Pretty good stuff. Only had three hook-ups in about three hours of fishing, landing one. Still, that one was a stud - an eight pounder fresh from the lake, silver as new nickel and sporting a serious set of shoulders. I felt a couple of hard bumps and the next thing I knew, I was into the backing. Way into the backing. Cool. She made her runs but eventually my guide scooped her up into the net. I nearly pissed myself. So I've got the steelhead bug pretty bad now. That one fish was enough to do it. And I'm sure I would have caught more fish had I been able to cast worth a crap. This first steelhead trip was also my first time fishing with a spey rod. I really suck at it. I mean, I did ok when practicing with a floating line. I could more or less pull off a circle-c or a double spey when I needed too. Not pretty, but workable. Out on the river though, where the water was high and stained, we were forced to use a fast sinking shooting head to get down to the fish. And yeah, I struggled. Casting that head was a real pain and I was really bad at it and only got the fly in the strike zone about half the time. So I'm guessing next time my hook-up rate goes up exponentially, 'cause I plan on practicing my arse off with my spey rod. And about the photo below of the brook trout - the Little Muskegon ran through the campground where I stayed. At the end of the day, a short walk from my tent were early black stone flies and willing brookies. Talk about icing on the cake. I think I need to move to Michigan. 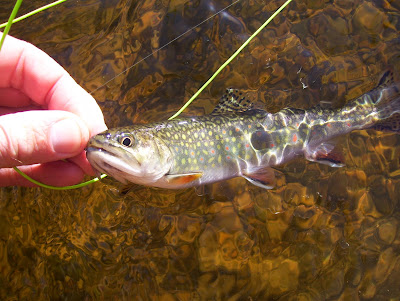 With havin so much content do you ever run into any issues of plagorism or copyright violation? My
blog has a lot of unique content I've either authored
myself or outsourced but it appears a lot of it is popping it up all over the internet without my agreement.

Do you know any techniques to help stop content from
being ripped off? I'd definitely appreciate it.

Feel free to surf to my homepage; 3d mahjong ()

You can use baking soda for skin/body care in varying ways & I could type all day
about my love of baking soda & all its benefits.
Another option- Clinique The Brush Collection -they're treated with a microbial solution that destroys germs.

When there is a connection between the consumption of fresh vegetables in the diet.

This notion carries over from the Garmin Edge line where
you can customize the display screens inside each
and every activity profile.

Good day! Do you know if they make any plugins to assist with SEO?

I'm trying to get my blog to rank for some targeted keywords but I'm not seeing very good results.
If you know of any please share. Kudos!

Have you ever considered about adding a little bit more than just your articles?
I mean, what you say is important and all. But just imagine if you added some great pictures or videos to give your posts more, “pop”! Your content is excellent but with pics and clips, this site could certainly be one of the very best in its niche properti jabodetabek. Very good blog!

get the best version for windows Driverpack Solution Free Installation

I loved as much as you’ll receive carried out right here.
The sketch is attractive, your authored subject matter stylish.
nonetheless, you command get got an shakiness over that you wish be delivering the following.
unwell unquestionably come further formerly again as exactly the same nearly a lot often inside case you shield this increase.Please kindly visit to my profile!

You have made some really good points there. I looked on the
internet for additional information about the issue and
found most individuals will go along with your views on this judi bola terpercaya.

Fantastic my friend, this is what we call the best article in the world i have seen in my life.

Wow, this is great article i have read and i will help you bookmark youre link to another site, so i hope you will visit our site and support to - poker online

very interesting! keep it up bro!
Visit my link too : IDNSport

a very good looking blog with awesome article. i really appreciate your effort, thank you!