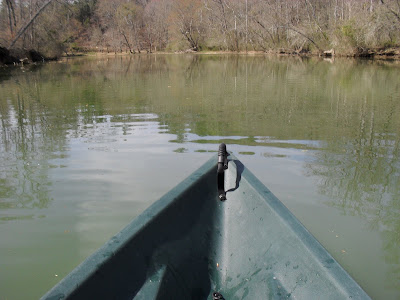 Been trying to draw a bead on these famous white bass runs down here.  Did some homework, read some fishing reports, put a game plan together, and headed out to a likely river, in this case the Chattooga.  Got a late start and didn't get to the river until around 11am, because well, I can be lazy.  The parking area at the Gaylesville ramp was pretty packed, so it was apparent that I wouldn't have much solitude on this trip. I hate fishing in a crowd, and although I didn't actually end up in a crowd, there were plenty of other anglers around. Then again, there was a positive side to this. I spoke with several nice fellows at the ramp who gave me some good info on where the whites were running. So I put the blades in the water and paddled hard for an hour upstream. It was work, but worth it. Caught several nice white bass on grey/white clousers.  More importantly, I learned a lot about the river and the white bass run here. I didn't have one of those epic 30 - 40 fish days that I have read about, but I did catch fish.  One more piece of the puzzle put down.
Posted by Ty at 9:48 PM