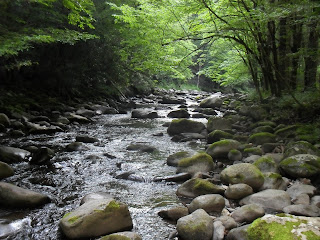 Slipped out of work on Friday and headed up to the Smokies for some long-anticipated stream time.  We rolled into Townsend around 8, stopping just long enough to throw our stuff into the cabin and pick up a few cold adult beverages. Then we headed to the stream. Middle Prong to be exact. You know, just to look at the water. I mean, it was getting dark and tough to see. Wading would be a bit too sketchy in the waning light. Probably wouldn't catch anything anyhow. So naturally I strung up a rod and started fishing. Couldn't resist, sketchy wading and falling darkness be damned. Caught three smallish rainbows and missed a couple of others on a sulphur dry. Nice way to end a hectic day. 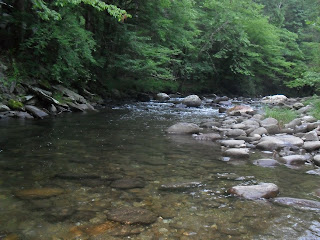 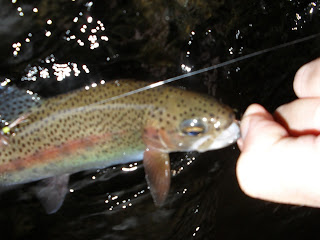 Saturday morning, we hit the IGA for breakfast (yes they have breakfast at the IGA. A pretty good one in fact) and then headed for one of my favorite stretches of Little River.  After a short drive and twenty minute hike, I was into my first rainbow of the day. And so it went. Wild rainbows on dry flies all morning. Typical, spectacular fishing in the Smokies. I had forgotten how much I loved fishing here. These waters are absolutely loaded with trout. Sure, most of the them are small rainbows, but there are some very big fish in these waters. I've seen them. Huge 20 + inch browns and rainbows. Not exactly common, but they're in there. And damn hard to catch too. No matter though. I'm happy enough catching their smaller brethren. Anyway, we fished until around noon before a thunderstorm ran us off the river. We thought about waiting it out, but the rain settled in pretty good and when the river began to turn brown with run-off, we packed it in and headed back to the car.  On the way back, we stopped here and there to toss woolly buggers around in the muddy water, you know, just to see. I caught one more nice rainbow, but that was it. Still, all in all a fine day in the Smokies. 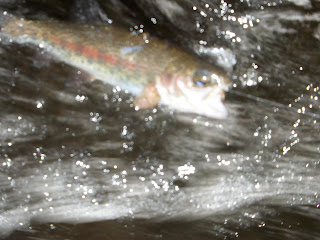 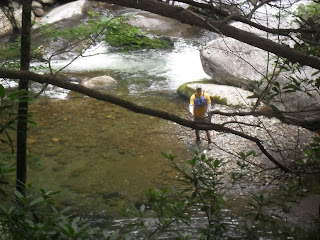 The next morning, more or less on a whim, we opted for a change of pace and drove up to the Clinch river. The Clinch is a stellar tailwater near Knoxville. We waded in at Miller's Island and immediately found pods of rising fish. Not that we could catch them. At least not at first. The fish were clearly on midges and I pulled out the old midge box expecting to stick a few. Didn't work out that way though.  These were tough fish, rising to midge emergers in about two feet of gin clear water. Tough, tough game to play.  I didn't get so much as a sniff on my midge patterns until I tied on a Griffith's gnat.  Started picking up fish after fish, all browns, after I tied that bug on, just like that.  Of course, the water started coming up shortly after that and the fish stopped rising. God, what I would have given for another hour of low water.  But that's life on a tailwater, and I tied on a white woolly bugger.  Bang! First cast with the bugger and I pick up a nice brook trout, maybe my biggest ever, pushing 14 inches. Of course, my camera is sitting in the car. Jackass. Anyway, I'm thinking I'm still going to be in for some good things with this woolly bugger, About that time though another fellow wades by on the other side of the river. "Better get the hell out," he says " or you'll be swimming in about twenty minutes."  I tend to listen to comments like that and headed out. I'm glad he gave me the heads-up. Wading out wasn't all that easy as it was.  I would have been in trouble had the come up much more.
With Miller's Island washed out, we drove downstream to the Hwy 61 bridge. A bunch of folks fishing there, and we only managed one small rainbow between us, so I won't waste too many words on that part of the day.
Stellar weekend though. Mountain streams and big tailwaters. Rainbows, browns and even a brookie. Right on.
Posted by Ty at 11:43 PM

Good way of describing, and nice article to get data concerning my presentation topic, which i am going to convey in college.