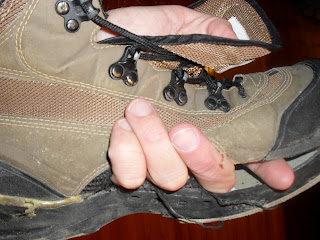 After multiple patch jobs and emergency on-river repairs, my Orvis wading boots finally gave out. This was was my second go-around with Orvis boots and I've come to the conclusion that, and I mean this in the best possible way, they suck. Not Orvis necessarily. Just their boots. Been through two pair in a fairly short period of time. They just don't hold up in the tough mountain stream fishing that I typically favor.

So I went with Simms this time. Had a pair of Simms a few years ago and they lasted several seasons. Still have them in fact and even wear them on occasion. They're held together with duct tape and Gorilla glue, but they're still functional. Sort of. As long as I stand in one place and otherwise don't move around much. 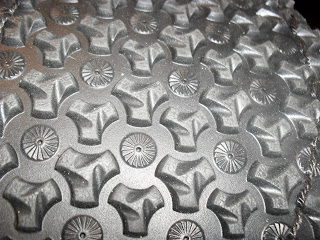 Anyway, going with Simms also meant moving to a rubber sole rather than felt since Simms phased out their felt line of boots in 2010. This was of course another salvo in the present war against invasive species like didymo and whirling disease. Admirable, sure, but you don't have to be a total cynic to figure Simms probably also sees the writing on the wall. Alaska has banned felt boots and other states -Montana, Oregon, Maryland, Pennsylvania to name a few - are considering similar measures. Probably not going to sell many felt-soled boots if they suddenly become illegal. Word is that Orvis and LL Bean will also likely be phasing out felt in the coming years.

Fine. I'm good with all of that. Anything to protect the rivers and streams, right? Right - but I would prefer not to slip and break my friggin' neck. Rubber treads by most accounts don't have nearly the grip that felt soles do, and that of course is the main knock against these boots. They just don't stick like felt. You can overcome this to a large degree by adding studs, but these have their own problems. For example, try climbing into your guide's gleaming new Clacka with studded boots. Go ahead, try it! He'll love it!

And it's important to remember that rubber sole boots still need to be disinfected after fishing in a river tainted with one of these invasive species. Rubber just makes the job a bit easier and more effective. Felt stays damp a looooong time and some of these nasties can survive for many weeks in the fibers. The rubber just eliminates this piece of it, but you still need to make sure the rest of the boot is disinfected by freezing, drying completely, soaking in a bleach solution, etc.

So we'll see. I'm going to go without the studs first. Maybe the rubber soles will work fine by themselves. If not, I'll go ahead and add the studs. Either way, I'll post my experience as I move into the post-felt world. I've heard mixed reviews. Some folks say they work great. Some say you might as well wear a pair of Oxfords to the river. Guess it doesn't really matter though. It's not like I'm going back to felt if the rubber soles suck. It's more like I'm going to learn to live with the rubber if I want to keep fishing. Felt is on its way out, like it or not.
Posted by Ty at 7:14 PM

Heck, those old-style hodgeman $20 canvas boots used to last longer than that! I had one pair for 4 years. Thats pretty sad.

Rubber soles arent so bad if you have decent balance to start with.

It is sad, McTage. Kind of surprises me with Orvis. I have a fair amount of Orvis gear and I've been happy with all of it. Not sure why their boots don't live up to the standards of their other stuff.

Let me know what you think of the rubber. I dig my Simms freestone boots. I am pretty rough n gear but the freestones are tough. This fall I am heading to AK with mymdad, so I will have to go get a pair of rubber soled boots this summer. Love to hear what you think of yours.

I got the Freestones as well, John. Glad to hear a good review on them. I'll let you know how the rubber soles work out.

simms boots are bulletproof! I regularly freeze mine while camping and steelheading.. they thaw after a couple minutes underwater in my net.. good choice. and great blog