A lot going on in the non-fishing part of my life this weekend, so I couldn't get out for a proper trip. Had to make due with sneaking off to a nearby river when I had a spare hour or two. Sometimes though, that kind of dash-and-cast fishing works out just fine. 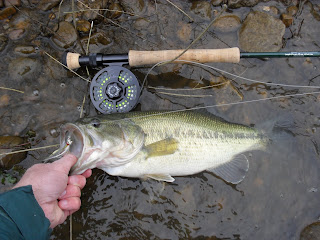 as well as quite a few white bass and yellow bass - 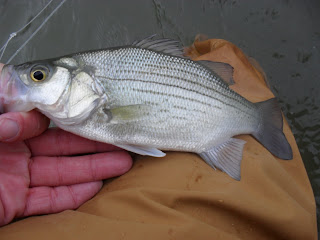 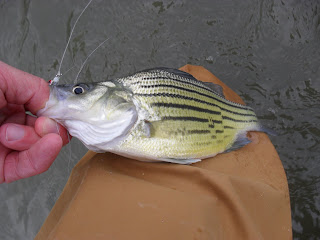 The water was loaded with baitfish. I could feel them bumping my fly line as it was swinging through the current and I occasionally foul-hooked one. The bass were corralling balls of these small fish in the slack water and tearing into them. A Clouser was the ticket and the one I tie for this water was a pretty fair match - 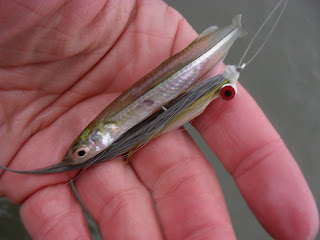 The weather was crappy most of the weekend with cold steady rain riding on gusting winds and coming in sideways, which was ok by me because that sort of thing keeps everyone else at home. I had the river pretty much to myself except for one other diehard. I watched this guy for quite a while. He was superb angler never missed a strike. When he made his move he always came up with a fish. 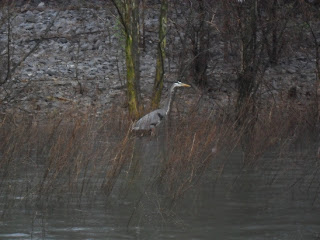 Did you also try topwater flies as well?

Good stuff.
Very respectable spring LM bass there.
I miss the Yellow Bass i used to catch from the TN river back when I lived in Knoxville. Supposedly someone illegally (read "bucket biologist") stocked them in a lake here in Memphis, but I've yet to investigate that myself.
That minnow is a Brook Silverside, just like the ones we were seeing in FL a couple weeks ago. A slim Clouser is a perfect match for them. Very cool.

Hey Fin, when I saw the bass chasing the baitfish, I went straight to the Clouser and an intermediate line. Topwater flies do ok on that stretch of river, but streamers w/sinking lines are usually the way to go.

Yeah Jay, those yellow bass are a lot of fun, even if they are little guys. I would like to after them with light tackle like a 4 or 5 wt. That's problematic on that piece of water because your next strike might be 20 pounds of striper. Just never know what you're going to get into there.
Thanks for the i.d. on the silverside. Beautiful little fish.

Here is my webpage gratis

In order to cope in the fast-paced market, new applications are
required. So unless service repair shop completes the formalities and
acquire the necessary certifications they can't start their business.
" Employees at Nike are encouraged to become curious and open to new ideas, whatever their source.

jewellery shop, do not tell apart how to do a thorough job.