Beer and a Book - a new monthly feature

During our quarterly meetings here at the Finewater Institute of Higher Fly Fishing, we came to the conclusion that we should broaden the scope of this blog a bit. After all, we are a complex, eclectic group with many worthwhile, honorable pursuits and interests.
For example, beer. We are very interested in beer. So there's that. We also read quite a bit, and not just the backs of cereal boxes, which probably comes as a surprise to many of you.

We further realized that many of our favorites, both beer-wise and book-wise, came to us via recommendations from friends. Why not return that favor and pass some of these along to you, our loyal readers, and share some of these gems? So here is our first installment of a new monthly Finewater feature - Beer and a Book. We will highlight one beer and one book each month. The book selections may or may not be related to fly fishing. The beer selections will be related to, well, beer. Admittedly, we're experts in neither, but that sure won't stop us from trying to act as though we know what we're talking about.

Our first book recommendation is Another Country: Journeying toward the Cherokee Mountains by Christopher Camuto. If that name sounds familiar, well, it should. Camuto also wrote A Fly Fisherman's Blue Ridge (another great book by the way) and his articles have appeared in many magazines and periodicals - Trout, Field and Stream, Sports Afield and Gray's Sporting Journal to name a few. So yeah, more than likely you've read some of his work. Camuto is an exceptional writer and Another Country represents some of his finest work in our humble and accurate opinion. The narrative revolves around the controversial release of red wolves into the Smoky Mountains, but Camuto is really taking on the bigger story of the devastating impact of the European migration into the Southern Appalachians and particularly the effect of this on the native Cherokee population. The drivel I'm typing here can't begin to do this book justice, so here's an excerpt:

"As I explored up each watershed, I hid behind the sound of its stream where I could, especially along those stretches of boisterous water that covered my scrambling over boulders as I grabbed slick arms of alder and ironwood to hoist the next stretch of woods into view. But I knew that the noise of the white water fell away downstream behind me, and I learned not to stumble forward into the abrupt silence of still pools at the tails of which small trout waited, trembling like strung arrows.
There was a time I could not walk along such watercourses without casting a fly on every likely pane of still water where a trout might be. But fly fishing taught me only that I was not a sportsman, and now I was fishing for the river itself, casting for the wild, wolfish spirit in these relentless Appalachian cascades, something stream-born trout once shared with forest-born wolves, a force freeform as whitewater, edgy as quartz."

To read Another Country is to get a glimpse of what the Southern Appalachians were before De Soto, before the settlement of Cades Cove, before the invasion of greedy logging companies. For all their spectacular beauty, these mountains are shadows of what they once were. The release of red wolves is an attempt, as Camuto sees it, to re-establish at least some link to the pre-European Southern Appalachian, or Cherokee, mountains. It's an incredible book and we highly recommend it.

And speaking of recommendations... 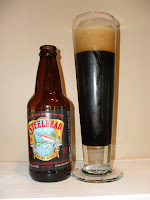 Any beer that has a fish on the label is off to a good start as far as we're concerned (Schmidt's notwithstanding of course), and the Steelhead Extra Stout by Mad River Brewing Company is no exception. This is a heavy, thick stout that pours into the glass like 10W-40 in mid-January - just the way we like it. Prominent flavors are coffee and chocolate, and, um, coffee. Very nice. If there is a negative to this beer, it's that it is just a tad sweeter than we prefer. Not really a negative, I guess, since some folks like this, but not something we really care for. 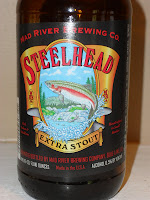 Anyway, if you're into stouts and porters(and who isn't), this is a good one and we recommend it. You can check out Mad River Brewing at this link. These guys have a pretty healthy selection of brews, many of which have won several awards in the brewing community. Definitely worth a look if the quality of their Steelhead Stout is any indication.
Posted by Ty at 4:53 PM

Very nice. Already looking forward to the next installment. When you put the Smokies and beer together like this, I automatically think of the Smoky Mountain Brewery in Gatlinburg... "Black Bear Ale" and "Tuckaleechee Porter"... I miss that place... it's been too long.

Ah yes, Jay, been to that brewery many, many times, usually after several days of hiking around in the backcountry. Nothing better than some Tuckaleechee Porter and one of those superb pizzas after several days of living off of trail mix and stream water. Great stuff. Thanks for stopping by!

I miss some fishing down in the Appalachians and miss even more the Brewery's. Can't wait to get back to both...

Yep T-Dawg, the Southern Appalachians are no slouch in either category! Thanks for commenting.