Visited a favorite stillwater to see if the pans were on the beds. They were and in a big way. I couldn't resist taking at least a few shots. I typically leave fish of any kind alone when they're on bed so that they can go about their, um, business (As John Gierach put it "How would you like it?"). So I paddled around the big pond, casting various flies here and there to see if the beds were in their usual places. After picking off a fish or two, I would move to the next pocket of beds. Hopefully didn't bother 'em too much this way. These dudes were an absolute hoot on the 3 wt. and it was very tempting to sit on a patch of beds and catch 'em until my arm fell off.

Bluegill, a small one. I've caught some hubcaps in this pond though. 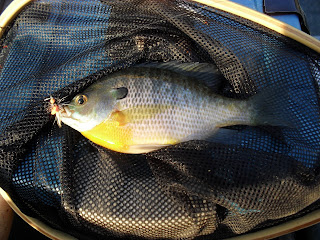 Redear (Shellcracker to those of us below the Mason-Dixon line) 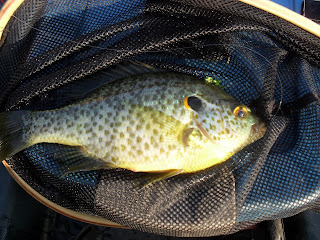 Redbreast. I think. No white edge on the opercle flap, so I'm going with redbreast rather than longear. 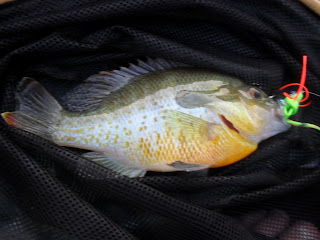 Also had a 7 wt. strung up for some bass fishing, but the bassin' was way off for some reason. This pond is great largemouth water and is always good for some very nice fish on any given trip. Not this time around though. Only managed one little dink bass. Weird.
Posted by Ty at 11:11 PM

I would agree with your Redbreast ID.
I like the term "hubcap"... that's a new one for me.
Them Shellcracka's sum good eatin'.

sunnies on the fly rod are a blast. Plan to do some of that during lunch over the next few weeks.

Thanks for sharing.
Passinthru Outdoors Blog - Sharing the Passion

The 3 Wt is off the wall when it come to gills especially the big ones. They can just about tie a knot in a 3 wt. rod. Great Post.

I was hoping you would chime in Jay. Figured you would for sure be able ID that redbreast.
You guys are right - few things are more enjoyable than catching sunnies on a light fly rod and then breadin' them up in some cornmeal. Lawd.

We made use of to check tumblr.com/ one-niche cheats as well as hacks, Official Website yet this device can transform your rating Directly Game Killer Download available on Android APK in lots of games, like an universal extremely hack tool. Seems Game Killer good Among all the game codes readily available Game Killer App in the here and now markets and video game stores.