Trip Report - Carp Flats 5/1 (If you go, don't forget the Chardonnay and candles) 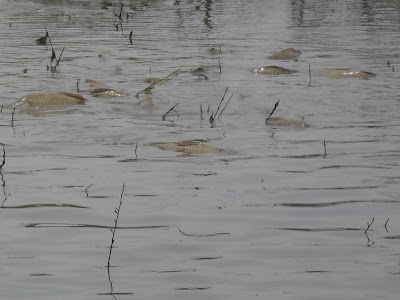 Well, the fever of spring romance swept over the carp flats this weekend. Not much feeding going on - the males were too busy chasing the females, and the females, for their part, appeared to be running for their lives. Appropriately enough the sky was overcast, the lights dimmed so to speak, to give the mud flats just the right ambiance. A little Barry White in the background and a few candles would have really set the mood. Kinda, I guess.

Scenes like this were playing out all over the flats. Spent quite a bit of time watching this craziness. I feel so dirty. 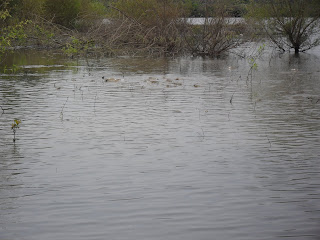 There were a few losers loners that couldn't get dates though like this poor sucker (rim shot). If you look closely, you can see his back above the water line. It's the light colored dot in the center of the photo with the wake behind it. Anyway, these carp were cruising in a back corner of the flats and feeding. After I took this pic, I put the camera down and cast to this fish... 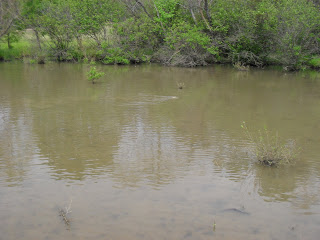 Even though most of the carp were preoccupied with other business, there were plenty of fish still cruising and feeding. Lots of targets and I actually caught quite a few fish. Into double digits anyway. A long 2X leader and small trout nymphs were again the keys to getting the takes.
Posted by Ty at 6:47 AM

OoooooHoooo, Man! This makes my poor little heart get all pitter-pattery!

Know what you mean Jay. Carp are friggin' awesome!

Looks like a whole lot of fun. It seems like every carp pattern I've ever seen is adorned with sili legs in some way. Any rubber legs on the nymphs you were using?

Bow-chicky-bow-bow. Poor wall-flowers though. First they get no luvin and then they find food that fights back!

Jay, I've never had much luck with large flies, rubber-legged and otherwise, with these carp. Anything larger than a #12 PT is usually ignored or outright spooks the fish.

Owl, Come on up but leave that 4 wt. at home. These fish will tie that thing in a knot!

Yeah, McTage, those wall-flowers got the raw end of this deal. No luvin' and no grubbin'.