Decided to take a look at some unfamiliar water this weekend. This stream is near my home and has been on my list of places to explore for some time, especially since I recently heard that it holds carp. Big ones. Even so, this was not a decision I took lightly. Getting there meant driving right by my favorite carp flats - flats I knew to be brimming with commons and grassies right now. Never leave fish to find fish - that's a rule, but sometimes we break rules around here and so I sped on, averting my eyes from the muddy plumes and shiny brown tails dotting the flats as I passed. 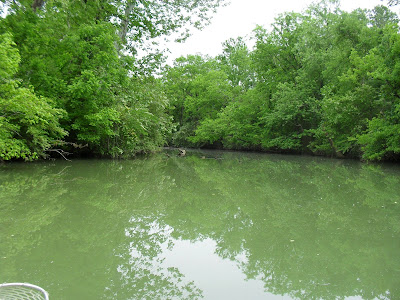 The stream itself was a quiet place, at least in the short stretch I paddled. Few sounds other than the slur of the boat pushing forward through the water and the steady hum of Thirteen Year cicadas in the trees. Apparently these guys suck at flying because there were quite a few flopping around in the surface film. Guess that's to be expected when you've spent the last decade or so in a hole in the ground. Interestingly, I never saw a fish take one, even when the insect's struggles carried it through likely lies close to the dark overgrown bank. 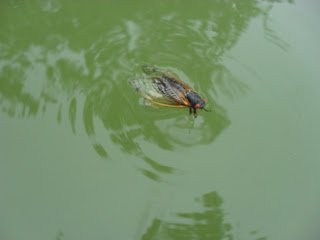 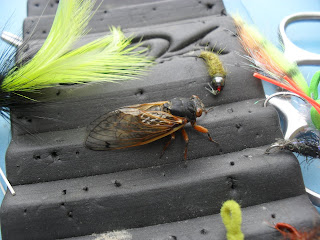 There was very little current. Thin dark seams curling around fallen timber and edging downstream were the only hints of a different story happening somewhere up ahead, that shift in narrative that occurs on just about any stream, bringing with it a rougher, edgier, swifter stream face full of rocky ledges and choppy shoals, the water gradually raising its voice at being forced to negotiate these things. I was well downstream of that here, but I know it's there. I'm already anticipating a return trip to push a bit further, find a bit more. 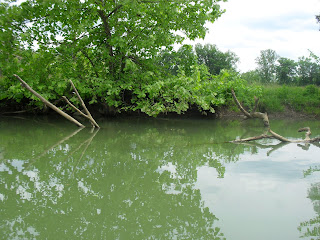 Every angler knows that streams and rivers don't give up much on a single trip, and that was the case today. I learned what a few hundred yards of this flow look like in late spring, nothing more. More will come on future trips, small fragments of information revealed here and there - during such-and-such month the redhorse run and bunch up on shoals to spawn, or, carp gather in this particular bend during the spring, or maybe, the mouth of this hidden feeder stream holds bass all summer long. That kind of thing. At some point I'll start putting the pieces together and get at least some small idea of the whole. Eventually I'll form a more or less complete picture of this stream in all seasons, although there will always be some missing pieces.

So in the end there was no fishing today. Just a leisurely paddle on new water seeing new things. Seems like that was enough.
Posted by Ty at 9:51 PM

Sigh...I miss cicadas. I grew up in Nebraska, but there aren't many in the mountains.

"the water gradually raising its voice at being forced to negotiate these things." -- wow...this was such a beautiful post, and I enjoyed reading it very much. I too am anticipating your return trip.

I've tried a cicada pattern (store bought- Bass Pro) when I've seen cicadas on the water but never with any success. I think fish are scared of them... they do look pretty intimidating.

Thanks Erin! Appreciate the comments. Wouldn't be summer without cicadas. The Thirteen Year cicadas are a real bonus this year.

I couldn't figure it out, Jay. I figured the fish would be hammering these things. Maybe the fish think the bugs taste like crap. At any rate, they wouldn't touch 'em.

It is sooooo hard to pass up known fish in hopes of finding the big dogs. Looks like a pretty cool but challenging area - I Cant wait to hear if you find anything.

Yep McTage, I'm rarely able to pull it off. Hard to pass up a sure thing.