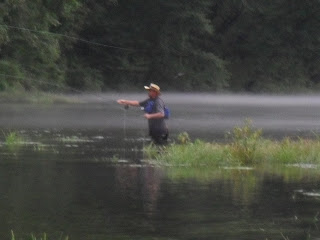 Hit the Hiwassee today with Shawn "Death Before Carp" Lemons. I argued for the mud flats, but Lems fishes only for trout, a serious character flaw probably stemming from his having been born and raised in Idaho. He still hasn't adjusted to the fact that while, yes, we do have trout in the South, it's the warmwater fisheries that carry the blue ribbon labels around here. Then again he doesn't drink sweet tea nor doff his hat at the mention of Lee or Forrest either, raising serious questions about his ability to adjust to life here in God's Country anyway.

So it was trout and the Hiwassee today, which turned out to be pretty ok too: 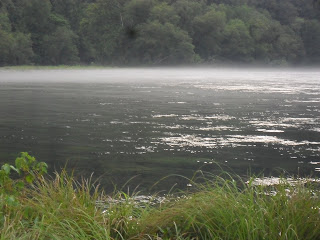 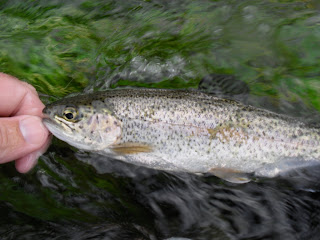 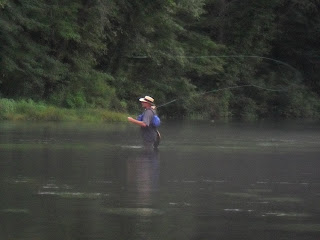 We didn't see any real bug activity to speak of and no rising fish. Every now and then a nose quietly broke through the film to sip something in, likely midges, but this was sporadic and nothing we could count on. So we dredged nymphs and threw a streamer or two, managing a few small trout. None of the flash and glamour of a good hatch and dry flies, but we'll take it.

Took a few minutes on our way out to poke around the powerhouse, which is where all of this trout business on the Hiwassee begins. Cold water is sucked out of Apalachia lake and pumped 10 miles or so through huge pipes: 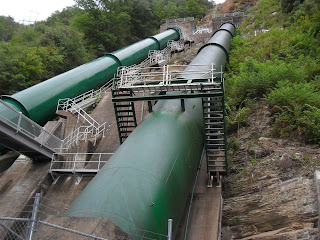 And then released into the river at the powerhouse: 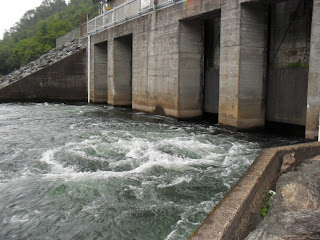 And a trout fishery is born. Obviously the water release is for power generation, but at some point someone said "Dang, this here water sure is cold. Why don't we throw some trout in the river and see what happens."

Well, it was more complicated than that I guess, but probably not much.
Posted by Ty at 11:22 PM

Ty
This river reminds of the Caney Fork which I fish with my son-in-law. Both are tailraces and have some awesome trout action not to mention all the other species. I have not fished the Hiwassee River, but thinking on making a trio there in the fall, is it good in the fall? I fish Smith Lake and the tailrace below which has trout, and it is similar to both the Hiwassee and Caney. Thanks for the report.

Yes, fall is a great time to fish the Hiwassee. One of my favorite times to go up there actually.

Sounds like a nice time on the water. The way they pump that water and then are able to sustain trout is quite interesting. Nice fish. I really dig those pics with the fly line in the air. Great stuff. Tight Lines.

Yep, these tailwaters are pretty interesting deals Magee. Some of them, like the South Holston, are exceptional trout fisheries. Thanks for commenting!