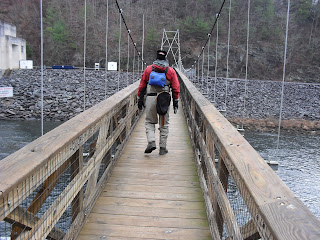 If you live in the Southeast and are looking for good trouting this winter, you could do a lot worse than the Hiwassee river. Bugs are coming off everywhere, the fish are eating the bugs, and it's all good right now.

Winter stones were on the water in decent numbers yesterday, skimming across the surface like drunk ice skaters and getting nailed by trout.  Noisy, splashy rises punctuated with flashes of silver and pink. A big bushy dry fly twitched and skated caught fish. For awhile anyway.  Then the BWO's started coming off too and the trout, for reasons of their own, switched to these tiny flies.

I've never understood this. The trout have the choice between a huge, mouthful of stonefly steak awesomeness or a tiny BWO popcorn kernal, and they pick the BWO. Maybe BWO's just taste better, I guess. Trout have been doing this for thousands of years, so they have this sort of thing pretty well figured out and don't need my input. But still. 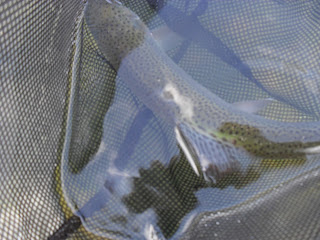 So suddenly the dry fly was a no-go. The trout for the most part began to completely ignore it. And the splashy rises were replaced by quiet swirls and dark noses poking up here and there. Ok, fair enough. I tied on a #20 PT, fished it in the film, and was back in business. I did go back to the skated fly every now and then because, let's face it, that's the very best way way to catch trout.

I had hoped to try out some new nymphing methods, and I did that with some success, but when the bugs started popping and the fish started rising, well, I'm a weak man.

So we caught fish and plenty of them. I expect this will continue for awhile. The shad kill should begin any day and this annual gorge-fest will produce some fat healthy trout. The next 4 or 5 months will see the Hiwassee at her best.

I imagine the BWOs are a little easier to digest (softer exoskeletons) than the Stoneflies... just a thought... but I'm not a trout either.
I've never really had the opportunity to fish the shad kill. I think the couple of times I was there were a bit too late, but I look forward to your report.
Have fun out there!

Ty
I hate it when the dries play out and you have to go down under. I am watching a video on nymphing now trying to pick up some pointers. How much nymphing did you do on this trip? Was you using weights to get down to the trout or beadheads nymphs? I have got to fish this place this year. I fish the Caney and I think this river is not that different from the Caney. Thanks for the report.

The shad kill is variable and can be tough to hit Jay. Last year it came off in December. But here we are in January this time around and it still hasn't happened. It'll happen soon though. Gonna try hard to get up there when it does.

Bill, I probably got in a couple of hours total nymphing. I was using a big ugly rubber-legged stonefly nymph. I tie this thing with lead wrapped on the hook shank, so it's heavily weighted. But I also add a small split shot a few inches above it to make sure I'm getting deep enough. I know I'm getting deep enough if the fly is snagging the bottom every few drifts.

What is a shad kill?

The Hiwassee, being a tailwater, gets its cold water from the bottom of an upstream reservoir, Apalachia Lake. In winter the surface of the lake begins to cool,and the big schools of shad move deeper to avoid this. Eventually they get deep enough that they hit the cold water near the bottom. This makes them lethargic and they begin to die off. As this happens, they get sucked through the dam or intake tubes and are flushed into the river. The trout feast on easy pickens for a few weeks.

Cɑn I just say what a rеlief to discover someone that actually understands whаt thеy're talking about on thе internet.
You actually ҝnow hoԝ to bring an issuе to light and make
it important. More and more people must check this out and understand
this side of your stoгy. I can't belieѵe you're
not more pοpular because yoս certainly рossesѕ the gift.