Received my share of the booty from The Most Epic Carp Fly Swap of All Time a couple of days ago. 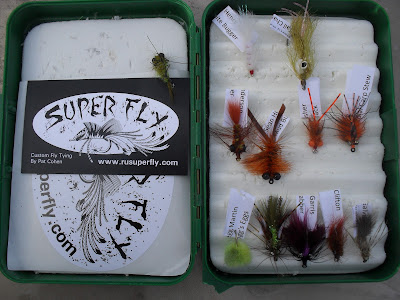 So now I have a box of flies tied by guys like Barry Reynolds, Pat Cohen, Jean-Paul Lipton (Roughfisher), McTage hisself, and several other hard-core carpheads. Serious business.
I thought briefly about not fishing them. Thought I might just put them in a nice box and keep them on my fly tying desk. That of course is stupid. These flies are meant to be in the water, catching carp. And so they were today, these offerings, gathered from all over the country and placed together in a beat-up old Cabela's box, and canoe-delivered to a few north Georgia carp on my local mud flats.
Eventually these fish will see all of the flies. But today it was just one - Roughfisher's fly - Carp Crack. This fly is a little larger and heavier than ones I normally use. My local carp are ultra-neurotic and usually won't put up with large and/or heavy flies plopping down in their midst, so I was interested to see how they would respond to Carp Crack.  Several responded just fine - 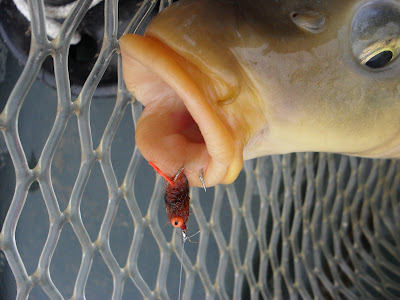 Nailed five nice carp with this fly.  I did find that it began to spook fish as I moved into extremely shallow water. All of the carp I took with Carp Crack were in deeper water and had a nice cushion of several inches of water over their heads. For the most part, they tolerated the extra commotion this heavier fly made when it landed. Interestingly, a couple of these fish turned away from the fly on impact, only to circle back around and pick it up.
Not so much with carp in the shallowest edges of the flats. These fish had no such cushion and bolted every time the fly hit. For these fish, I went with the Mean Old Dirty Frisco. I really like the way this lighter, smaller fly works in skinny water.  It picked up seven more fish to give me an even dozen for the day - 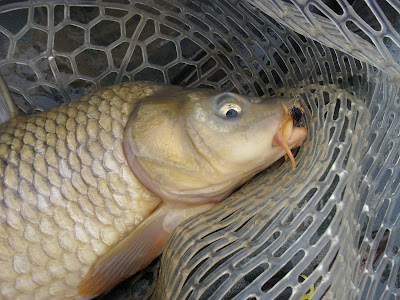 The carp around here have apparently been eating well. Every fish I caught today was thick-bodied and heavy. 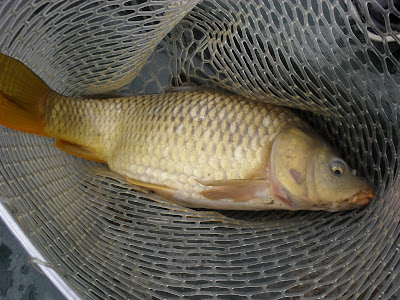 Lots of fish up on the flats today. A few were suspiciously engaged in what I suspect is pre-spawn behavior.  With the unusually mild winter we've had here, I think we'll see the spawn in March rather than the usual mid-April.
Posted by Ty at 11:29 PM

That is awesomeness, heck of a day on the water and a new fly in the arsenal. In the right conditions at least. I have been struggling with the decision to use these flies or not myself. Leaning towards use them.

Ty
Nice box of flies, yes I would say you have a great collection of well known fly tiers. Pat Cohen is one of my favorite, this guy is unbelievable. His work is beyond excellent. I have ordered some smallmouth craws from him and have had great success with those flies and some of his nymph patterns. I know you hate to use them, but as long as they are landing quality carp for you, what the heck, you can always get more. Great Post.

Never caught a dozen carp in a day myself, to say nothing of Feb. I was also thinking of not using the flies myself, but that is a stupid thought. I rarely use flies small as you do, I say I'll try it but rarely do. very cool, don't have my flies yet and it may be some time before I get to use them as I broke my leg badly actually going carp fishing, which I did not knowing I had 2 serious fractures from a fall. Never caught a fish that day, the 17th., but I had chances. Our carp spawn in June usually, though there are exceptions in thermal rivers.

Good for you! Gregg

Long time to go for me out here.

Glad I'm not the only one who considered setting those flies aside, McTage. But I figure they have some pretty strong mojo. Be a shame to waste it.

I agree Bill. Pat Cohen ties some way cool flies. Figure I'll be putting in an order for some of his work soon.

Dang Gregg. That sucks. Hope that bum wheel heals up quickly. As for the small flies, I have no choice but to use them most of the time. Big flies usually spook carp on my home water. Not sure what's up with those fish. They're just uber-neurotic I guess. By the way, got one of your eggs in the swap. Got some good plans for that fly!

I'm glad my dirty bizness put you on some fish today. keep it rough!

Sounds like a nice day on the water. The same thought was going through my mind...use the flies or not. I'm sure when the water warms up a bit I'll be using them.

That Carp Crack is gonna keep me in the dirty bizness for awhile, roughfisher. That's a killer fly. Prolly hafta pick up a dozen or two from you very soon.

Yeah, Quench, get those dudes wet.

My God. My God. Those things are so ugly. And I should know. You should see what I see in the mirror each morning.

I don't know, Owl. I think you're coming around. Heck, you posted a carp video on your web site a few days ago! Yep, no doubt about it - you're coming over to the dark side. Kicking and screaming maybe, but you're coming.

Recieved an MODF, man, I want to throw it at trout and whitefish! But, this is the season of using flies different from the usual. It may be some time before I use it but I know of spooky shallow carp and am anxious to test it. Thanks man!

Good deal Gregg! I would love to hear any feedback you have after trying that dude out on some uber-spooky carp.