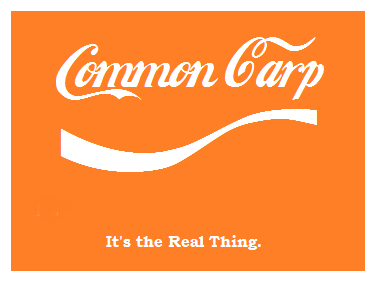 Yesterday I learned that a 30+ inch common carp is a very different animal from a 30+ inch grass carp. The grassie, while capable of putting up a fairly vigorous fight, is not in the same class as the common.

I caught a 36 inch common carp on Roughfisher's Carp Crack, my first common of that size.  There were carp everywhere, but nearly all were engaged in spawning. There were very few catchable fish, but I noticed a behemoth off to herself, separate from the nearby orgy and motionless in the stained water. I dropped the fly about three inches off of her nose. She made an almost imperceptible wave of her tail and eased forward. When she stopped, I lifted the rod tip and felt the huge weight. She shook her head a couple of times and then, realizing that something was wrong, bolted for open water. At that moment I realized that I was into an entirely different level of carp fishing. 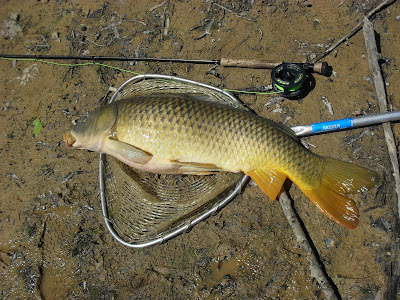 The reality is that I was unprepared, overmatched and had no business landing a fish of this caliber. The issue was in doubt right up to the moment I slipped the net under her.

This was new water for me. A shallow backwater off of the Tennessee River. Big water. With big fish. I'm going to have to rethink some things if I plan on fishing this water again. Which of course I do.
Posted by Ty at 10:59 PM

Wow Ty. Its hard to tell from a picture but at 36" you are pushing the 30lb team if it has girth. That was how long John's 31lb carp was last summer (my only frame of reference). You are a carpin god! Good thing you got all those meat flies now.

That surprises me a little. John's fish looks quite a bit bigger. My fish was fat, but I don't think she had nearly the girth of John's fish.

I don't know about the carpin' god part. I think lucky SOB is more like it.

Very nice fish!!! I agree, the few grass carp I've hooked were essentially dogs, or nothing like a common. I imagine it happened to you, when a fish has nearly 100 yd. backing out there and breaches, it's amazing it's that far away. I feel as helpless as ever then. Good for ya!

Sweet! Time to break out the 8 wt and a digital scale! nice fish Ty...as for size. in my experience there is little to no connection between length/weight. Obviously that is dumb and can't be true, but what i mean is the body shape of carp varies so greatly from water to water (and section of river to section of river) that a 25 inch fish can be several lbs different than another 25 lb fish caught elsewhere. That's why i carry a scale...only way to know. The really heavy fish i've caught all had big, thick, broad shoulders. that fish is a beast! congrats!

I just changed your contact in my phone to "Carping God" for the record.

Ty
I will take either one on the fly--the grass or the common would be a fight for me. I really thought the grass crap would be a beast on the fly rod, but shows what I know. Thanks for sharing that bit of information

Now that I'm in Birmingham, it might not be too far a drive to let you guide me on this section of the big river... in case you need any company.
By the way, I'm very much looking forward to my first trip of the year to LRCNP... I'm just a bit closer to it now.

Agree Gregg. Every now and then a grassie will give you good run, but even the best fight from a grassie won't match the common.

Thanks John. Definitely going to invest in some scales. I think your fish looks quite a bit thicker and is a heavier fish. Not that I'm complaining! Ha ha, Carping God - that's funny. I'm still a carping newbie compared to you hardcore guys.

Yep Bill, I'll take either fish as well, but man those commons are AWESOME!

Jay, you are more than welcome to come up any time. I would be happy to take you on a carping trip. And I need to get down to LRC myself. Haven't been over there since last year.

Thanks Mr P. Got several other new spots I hope to try this year. So far working out pretty well!

Damn. I'd drive quite a distance for fish of that caliber. Totally agree about grassies. All the fun is in getting them to eat. They are vegetarians, after all.

Yeah, I would too, lowbrow. Been doing a lot of driving, scouting out new spots. This place turned out to be pretty good.

Grassies are fun and I can't resist casting to them even though I know it's largely a fool's game.

The article is very interesting and very understood to be read, may be useful for the people