Spent the past couple of days on the carp flats and the fishing has been, well, spectacular. A few observations:

1. The spawn is a remarkable event. I guess you could say it's somewhat ordinary in the sense that it occurs every year, but it's an amazing happening that should be observed when the opportunity presents itself. The carp spawning grounds yesterday were shiny with the sun glistening off the backs of hundreds of carp in extremely shallow water doing their thing. The water rocked and boiled with big fish. I kept a respectful distance and observed for awhile. Can't say the same about a few Canadian geese who were literally standing along the fringes of all of the commotion watching the whole thing play out. The pervs. 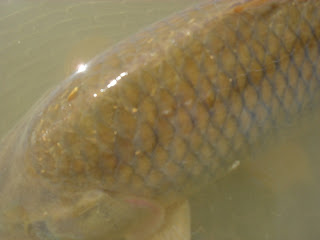 2. Grass carp continue to baffle me. Last year I cast to dozens of grassies and caught three. Or maybe it was four. Anyway,  I cast to three grassies yesterday and caught two. Unheard of. Both were in shallow gin clear water and made an aggressive move to the fly (an MF'er) the instant it hit the water. The first one was a beast and acted accordingly, with run after blistering run into the backing.  So many of these runs in fact that I seriously considered calling a couple of my trout-fishing friends during the fight so that they could hear the reel shrieking (This is carp fishing, boys.) He fought hard all the way to the net. The second grassie made a few good runs as well but eventually gave up and allowed himself to be dragged in. They taped out at 34 and 30 inches, respectively.  Five feet of fish in the span of about 20 minutes.  Crazy stuff. 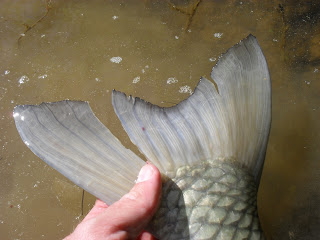 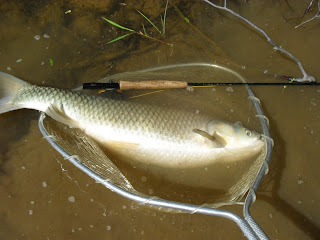 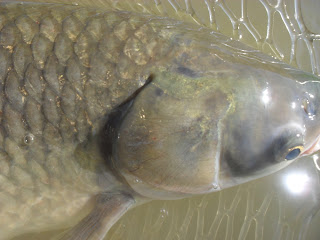 3. I could be imagining this, but carp fight harder in spring. Maybe they're all jazzed up for the spawn. Maybe they're rested and ready after a largely dormant winter. Maybe they can give it a better go in water still cool from winter. Higher O2 content and all that. Probably all of these things to some degree. Whatever the case, I've been seeing a lot of backing lately. Even the small ones threaten to smoke the reel right off the rod sometimes. 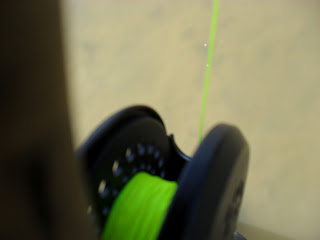 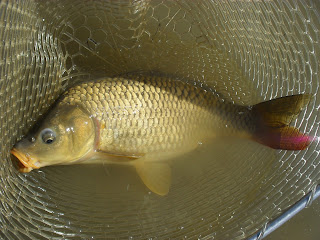 4.  I've settled on a theory about why the carp on my flats rarely take large flies. I've noticed over the past couple of years that my local carp are always found in areas with a thick mud floor. There are several shallow flats on this lake that have hard rocky bottoms, and I rarely find carp there. They're always on the mud.  So  they are undoubtedly feeding on aquatic insects in the muck. Small stuff like mayfly nymphs and midge larvae, not large prey like crawfish, leeches, etc.  So I think most of these fish are immediately suspicious of any large fly that hits the water and often spook when they see one.
I've been experimenting with some nymphing techniques from my trouting days with a fair amount of success. These fish are keyed in on the small stuff.  That said, there are always a few mavericks out there willing to eat a big ol' honkin' fly, and I nailed a few on McTage's Primordial Carp Stew these past couple of days. 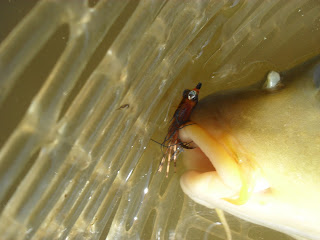 Good trip report Ty! Grass carp are sort of a nemesis with me,we have plenty in places but I do NOT fool many. Now I'm jacked to try harder. My carp are largely over deep mud bottoms, but they are crawfish, seen plenty of adults. If I had to pick a size most normally used for a fly, it would be an 8, unless an egg, then a #6. I'm going ti TRY different things this year, but one rod always has an egg, can not help that. Good trip! Ours spawn in early June most years, sometimes to July. Actually going tomorrow, can't wait.

Wow, two nice grass carp in 20 minutes! That is really great Ty. Pretty cool to see that the Stew has come through for a couple of Georgia carp. Feels good.

Ty
Great report---grass carp are a beast on any tackle you choose. thanks for sharing a great story

Yeah John, I love 'em too. They irritate the hell out of me sometimes, but eventually you get rewarded for paying your dues.

I don't fool many grassies either Gregg. I cast to about fifty for every one I actually catch, it seems. As for the egg, I'm probably going to keep a rod rigged with an egg after reading McTage's and Lonny's reports!

The Stew actually nailed several nice carp McTage. I think that pattern tied with little or no weight would absolutely hammer the carp here.

Thanks Bill! Some grassies definitely test the old drag system for sure.