He may not be thick, but he's short. 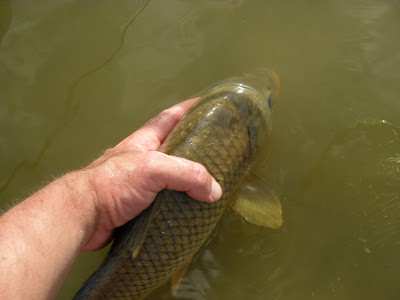 The flats were largely devoid of fish today, save for a few pockets of late spawners. Seems like it happened this way last year too.  The flats filled up with carp during the spawn, then emptied out except for a few stragglers and late bloomers. Over the next few weeks, they should move back up in good numbers.  Not sure why the brief post-spawn exodus. Maybe they're all just trying to avoid those awkward post-orgy encounters (But you said you'd call me later!). Maybe they all eased off  to smoke a cigarette. Who knows.

At any rate, very few positive fish around. Got maybe a half-dozen legitimate shots at feeding fish. I managed to ruin most of those with ill-timed hook sets and sloppy boat handling. Finally landed a small one. This little guy was something to watch. He was in extremely shallow water and was absolutely hoggin' it up. The upper half of his body was well above the water line and I could see his gills flaring as he worked the mud. Sounded like a pig eye-ball deep in the trough. Can't remember ever actually hearing a fish feed like that. Dropped an MF'er about a foot in front him, and he swam right over to pick it up.  Being a little short on beef and brawn, he caved to the spring of the 5wt quickly. But he was a carp. Caught on a fly. And today that was enough.
Posted by Ty at 10:35 AM

Just too cool! I lost your fly to a tree, must make some up as you do so well with it.

Ty
Glad you hooked up with one Crap today, I got a feeling your number will increase on your next outing. You mentioned boat position, it is critical when you are chasing weary fish such as the crap and of course spots. I have lost the chance to land quality fish at times because I had the boat out of postion. Thanks for sharing

One some of my local lakes I notice the same lag / return. On others they stick for a couple of weeks in a weird transition and then head deep for the rest of the season. On those lakes those couple of weeks are KILLER though.

Gregg, I need to refill my stock of MF'ers and will be tying some up soon. Shoot me your address and I'll mail a few out to you.

Bill, fishing for carp from a boat can be tricky. Any kind of mistake can, and usually does, blow your chance at a fish.

It's weird McTage. Last year, I thought I was in trouble carping-wise after the spawn. The flats were completely empty. Then the fish were back in a couple of weeks. Strange.

Not sure if the message on 'Holler was recieved, email me at gdjrb@q.com and I'll provide you with my address. Would like to send some smaller egg ties as well, I sure give them thought for your waters.

Hey Gregg, I don't think that message came through, but no worries. I'll shoot you an email today. And heck yeah, I would love some of your smaller eggs. I've used the egg I received in McTage's swap, but I think it's a little big for my local schizo carp. I think the smaller version might just be the ticket. You have yourself a deal! I'll be in touch.

I started carping late this year (last weekend), though I've been thinking about it for a month. I skipped right over the main spawn and the walk-of-shame period and found starving fish first outing. I'm just a bit south of you, so you'll be golden any minute now, I'm sure.

More than enough. I'm still just surprised it's possible. And I very much enjoyed the post-spawn banter theory. ;-)

Yep lowbrow, I think so too. Thought about going out there today but didn't feel like sitting in the rain. Must be getting old.

Yeah, I'm surprised too Erin. Pretty much every time I actually get a take.

Fishing for carp on a boat? Your a braver man than I am!! Hey Greg here is something I wanted to pass along to you. I just had a new fishing shed just completed today. I had it delivered and assembled by Backyard Rooms. I have a lure makers paradise inside!. Check it out at
Backyard Rooms

That would be sweet and those look nice. When and if my shed of assorted camping/garden stuff craps out I'll let you know. I have a room of my own, my wife does not, a bit unfair.