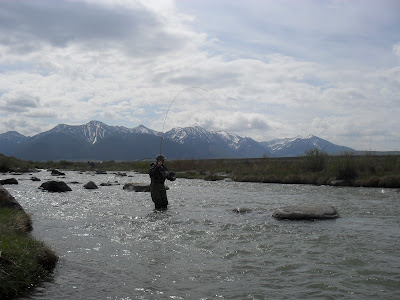 Montana is an extraordinary place. And not just because it has premier trout fishing and spectacular scenery, although there is plenty of that. It is also the most fishing-centric place I've ever seen. And "fishing" in Montana-speak means fly fishing. Some things to consider if you're going:

-Don't bother packing your fly boxes. Find a local fly shop when you arrive and let the guys there clue you in on what's working. Buy plenty of the flies they recommend. Plenty.

-Finding a fly shop is not difficult since every town, no matter how small, will have a minimum of two.  A "town" may be nothing more than a stop sign with 4 or 5 buildings on either side of the street. But at least two of those buildings will have the silhouette of a dry fly painted on the plate glass window out front.

-It's worth noting that even convenience stores often carry a decent selection of flies. Seriously.

-Nine times out of ten the clerk at the convenience store will ask if you've been fishing. As will your waitress at any restaurant. Maybe they themselves fish, or maybe they don't. But they at least recognize that a guy with a sunburn, bloodshot eyes, and a deep Southern drawl isn't likely there for the wildflowers, so fishing is a good bet for a point of reference. If she does fish (likely), be prepared for the follow-up questions if you allow that yes, you have been on the water. She will ask you where and what the fish were taking. It's much better to say that they were taking a #20 Indigo Child than "some itty-bitty kinda bluish fly".

-The locals are practical people and willing to barter. When we experienced a bit of car trouble (Note to Steve- "Diesel Fuel Only" literally means diesel fuel only. OK?) just outside of Ennis on Sunday, when all shops and garages were closed, we found a local mechanic willing to come out and fix the problem. His fee was two hundred bucks. And a fifth of Wild Turkey.

-I was not part of the negotiations on that, but was told later that it was the Turkey that sealed the deal.

-Liquor stores are closed on Sunday, so they won't sell you a fifth of Wild Turkey. But the local bar will.

-Speaking of local bars, if you're ever in Ennis be sure to stop at the Long Branch. It's an interesting place, and if you are polite and mind your manners, you stand a good chance of getting out alive.


-For accommodations, you could do a lot worse than Kelly Galloup's Slide Inn in Cameron. Kelly and his crew are top notch. And Three Dollar Bridge is just down the road. So is Grizzly's, a good spot for dinner after a long day on the river. Ask for the waitress called "One Fish".

Please find below the obligatory photo of a genuine Madison River rainbow trout. Enjoy your stay. 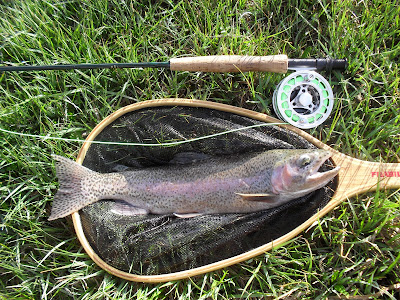 Nice stay, fishing, weather looked fine, everything you said is what it is, like that here to by the way. Lots of Madison River, I'm sure you were more than from Quake Lake to Ennis. If I fish for trout that is one place to go!

Ty
A great description of what to expect when fishing in Montana. This is my dream trip when my wife retires next week. What rivers did you fish and how was the catch ratio? If I could just land some as good as you posted I would be happy. Thanks for sharing

Hey Gregg, we spent quite a bit of time in Idaho - Pocatello, Idaho Falls, etc. It's all the same to me. Put me down in Idaho or Montana and I'll be a pretty happy guy. And yeah, the Madison is awesome.

Bill, we spent most of our time on the Madison River near Cameron, MT. We hammered the fish pretty good. Could not begin to tell you how many we caught but it was a bunch. Steady action all day long. Most fish were 12-14 inches. Quite a few were 16-18 inches. Even had a couple of 20 inchers in there. Amazing fishing. We also floated the Beaverhead near Dillon, MT. Great river with a lot of browns, but it's best fished via floating.
Hope you make that dream trip. It's well worth it. Montana is incredible.

Good one. Hopefully I can use this guide to avoid embarrassment if I ever go to Montana. With one hand (my typing hand) I can count the number of 20" trout I've ever caught. I have done that diesel thing before though, with a work vehicle.

I know lowbrow. I've caught exactly two 20 inch trout in my life, both on the Hiwassee river in TN. But I have hooked a fair number of 18 inch fish in MT. You can expect to see a few 16-18 inch fish out there. And I thought we were really screwed with the truck. That mechanic saved our sorry butts and our trip. Good people, those Montanans.

After study a few of the blog posts on your website now, and I truly like your way of blogging. I bookmarked it to my bookmark website list and will be checking back soon. Pls check out my web site as well and let me know what you think.