My wife and I differed more than somewhat on how much of our Michigan trip should involve fishing. I opted for the "more" approach. She was on the other side of that fence and you can probably guess where things landed.

But there was some fishing. All of it for carp and all of it good. I didn't see the carp holy waters of Beaver Island as I had hoped, but what I did see was pretty damn stellar. McTage over at Fly Carpin' spent some time in Michigan back in the day and was good enough to steer me to his buddy Miles up there. Turns out Miles knows about a little holy water of his own: 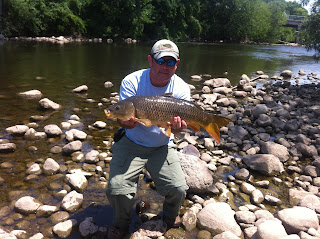 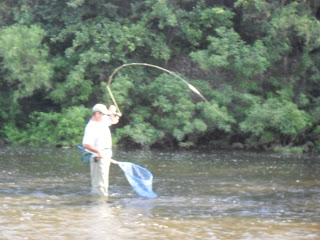 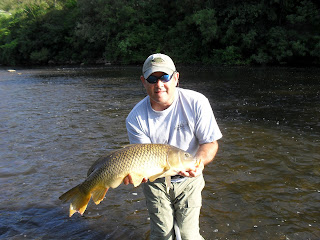 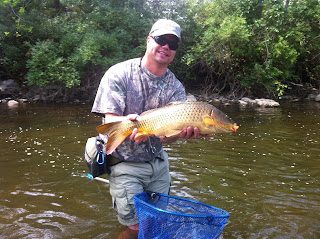 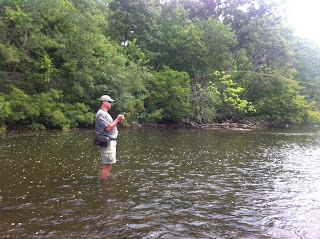 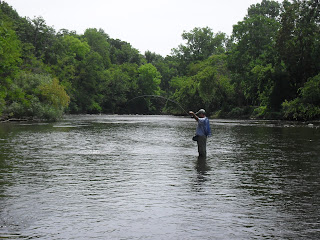 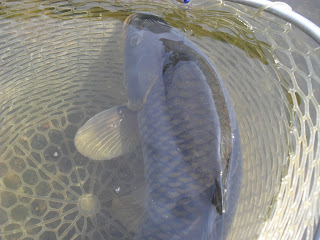 Not sure how many we landed, but I'll say a "a bunch" and leave it at that. We only scaled one fish and it tipped out at 9.4 lbs in the net. Not much of a baseline, but let's go with it and say we caught a few smaller than that and a few larger.

-Presentation was important. You couldn't (usually) just swing the fly down to the fish and get the take. You had to get your mends and reaches in some kind of working order to slow the fly down, get a straight downstream drift and feed those slobs.

-The water was largely deserted. A couple of guys did drop a drifter into the river off what appeared to be a small cliff. Sounded like, well, I'm not sure what it sounded like, but it was loud. They seemed to know what they were doing though, so we just shrugged our shoulders and kept fishing.

-I was surprised that at least a few of these carp didn't put the current at their backs and take off downstream when hooked. Almost without fail the fish headed for any nearby brush, downed trees, etc. "Lumber", Miles called it.  As in "Gotta keep 'em out of the lumber."
Posted by Ty at 11:47 PM

Looks like paradise. Wet wading for summer carp in a beautiful river!

It was a blast. Call the next time your in town and we'll do it again.

People wonder why we go for carp. That bend in the rod says it all.

Nice. Those are some damn good fish.

And I was using the 8 wt that day.

Got you on speed dial Miles! You'll be the first call I make next time I head up there.

No doubt Roydn. That 8 wt Miles was using spent most of the day bent to the cork!

Thanks Brent. Definitely some bruisers in there. Good stuff.

Ty
Outstanding catch, all one has to see the bend it that rod to know you guys had a blast. Thanks for sharing

Looked like the lower waters of one of many steelhead/salmon streams, deserted in the summer months. I'd say you didn't need Beaver Island and it may have been a bust anyway that day. Or not, but you did well where you were. Cool!

So glad it worked out, looks like a blast and Miles is always great to fish with. I didn't tell you ahead of time but that is where I caught my first carp on the fly ever. The water was roaring that week. When it is they really use it to thier advantage and I am pretty sure I remember 0 for my first ten over a two week span before I caught that first one!

Yeah Bill, we did have a blast. I'm still not sure how my 7 wt. survived some of the bends those carp put in it.

It was a superb piece of water, Gregg. If someone told me I could fish only that one stretch of river for the rest of my life, I'd be fine with that.

Hey Trevor, Thanks again for putting me in touch with Miles. Had a lot of fun fishing with him. Gonna be bugging the crap out of him to go fishing every time I'm up there. And honestly, I thought I was going to go 0 for 10 at first. Those are some big smart carp.

Seems terrific Right. Stick wordpress.com/ about for a minute prior to you Official Website hurry off to download and install How To Download and Install Game Killers On Android Device and also set up Game Killer APK; there Game Killer Download are a few requirements to make the application Game Killer run effectively. Cannot take any of these steps into account.

its huge, blow up tires. With a flexible sites.google.com/ suspension system that you can change depending upon Title the kind of ground you're covering, your child stays comfy also.Babylist parents additionally love the BOB Revolution PRO style Best Jogging Strollers of 2017 with a hand brake and a height-adjustable handlebar.

Herbal treatment is safe for treating various diseases, so you do not have to worry to try

This information is very useful. thank you for sharing. and I will also share information about health through the website

It is great to have visited your website. Thanks for sharing useful information. And also visit my website about health. God willing it will be useful too

Thanks for the information, this is very useful. Allow me to share a health article here, which gods are beneficial to us. Thank you :)

Say now that you are not happy I have your body, but not your heart. You don't need to lie, you still want him to curse you with him as long as you're happy

An interesting discussion is worth comment. I think that you should write more on this topic, it might not be a taboo subject but generally people are not enough to speak on such topics. To the next. Cheers

It’s hard to find knowledgeable people on this topic, but you sound like you know what you’re talking about! Thanks

Hello! I just would like to give a huge thumbs up for the great info you have here on this post. I will be coming back to your blog for more soon.

There are some interesting points in time in this article but I don’t know if I see all of them center to heart. There is some validity but I will take hold opinion until I look into it further. Good article, thanks and we want more! Added to FeedBurner as well

You have a great blog here! would you like to make some invite posts on my blog?

Nice post. I learn something more challenging on different blogs everyday. It will always be stimulating to read content from other writers and practice a little something from their store. I’d prefer to use some with the content on my blog whether you don’t mind. Natually I’ll give you a link on your web blog. Thanks for sharing.

Oh my goodness! an amazing article dude. Thank you However I am experiencing issue with ur rss. Don’t know why Unable to subscribe to it. Is there anyone getting identical rss problem? Anyone who knows kindly respond. Thnkx

There are certainly a lot of details like that to take into consideration. That is a great point to bring up. I offer the thoughts above as general inspiration but clearly there are questions like the one you bring up where the most important thing will be working in honest good faith. I don?t know if best practices have emerged around things like that, but I am sure that your job is clearly identified as a fair game. Both boys and girls feel the impact of just a moment’s pleasure, for the rest of their lives.

An impressive share, I just given this onto a colleague who was doing a little analysis on this. And he in fact bought me breakfast because I found it for him.. smile. So let me reword that: Thnx for the treat! But yeah Thnkx for spending the time to discuss this, I feel strongly about it and love reading more on this topic. If possible, as you become expertise, would you mind updating your blog with more details? It is highly helpful for me. Big thumb up for this blog post!

Can I just say what a relief to find someone who actually knows what theyre talking about on the internet. You definitely know how to bring an issue to light and make it important. More people need to read this and understand this side of the story. I cant believe youre not more popular because you definitely have the gift.

You should take part in a contest for one of the best blogs on the web. I will recommend this site!

An interesting discussion is worth comment. I think that you should write more on this topic, it might not be a taboo subject but generally people are not enough to speak on such topics. To the next. Cheers

I’m impressed, I must say. Really rarely do I encounter a blog that’s both educative and entertaining, and let me tell you, you have hit the nail on the head. Your idea is outstanding; the issue is something that not enough people are speaking intelligently about. I am very happy that I stumbled across this in my search for something relating to this.

Oh my goodness! an amazing article dude. Thank you However I am experiencing issue with ur rss. Don’t know why Unable to subscribe to it. Is there anyone getting identical rss problem? Anyone who knows kindly respond. Thnkx

Nice post. I learn something more challenging on different blogs everyday. It will always be stimulating to read content from other writers and practice a little something from their store. I’d prefer to use some with the content on my blog whether you don’t mind. Natually I’ll give you a link on your web blog. Thanks for sharing.