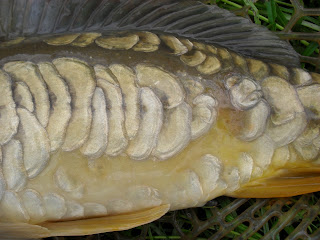 Yesterday, as I eased my boat toward the first fish of the day, I saw that it was a mirror and immediately went into full-alert ultra-stealth double secret probation mode to make sure I didn’t completely screw it up.

And then I completely screwed it up.

The first cast was a bit too long and a bit too close, the leader landing practically on the carp’s head with the fly hitting the water about a foot beyond him. I tried to drag the fly into place but the fish knew something was up, turning from the fly and moving away. The carp spirits were apparently not paying attention though, because instead of outright spooking and relocating to another zip code, he swam casually toward my canoe and resumed feeding a foot off of my bow. That was the first the miracle. The second miracle came seconds later when he all but bumped his head on the boat to get at the fly I dapped on his nose. 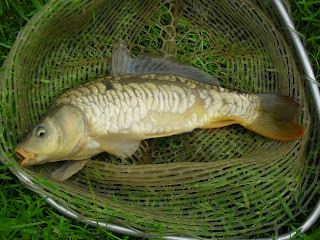 The flats were loaded with tailing fish and I took several with the usual MF'er. Also got shots at two grassies, hooking one.  This fish only made a couple of determined runs and then swam in wide circles around the boat for awhile. Weird. He taped at 31 inches and scaled at 12.4 lbs. 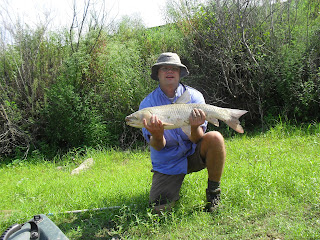 Ty
Awesome catch, that thing had to be a hoot on the fly. Do you eat carp? I saw a segment on Diners, Drives-in and Dives the other night and they were featuring a drive-through in Wisconsin serving a carp sandwich. Thanks for sharing

Nice work, Ty. That's a beauty of a mirror and a rock solid grassie.

Ty-that is one striking mirror! Cool story as well. The grass carp I've caught, all 2, were dogs. One I did not catch however grey hounded 3X on a fast run and pulled off, probably fouled I guess. A koi, the only one I've hooked, also ran fast and gave me 2beautiful grey hounding orange water breaks, it pulled off also. Anyway, good job for the day!

Just think, if you had hit the first cast he may not have taken, you could have missed the take, whatever. Instead of screwing it up maybe you should just play that first cast as clever manipulation.

Nah, I don't eat 'em Bill. My love for carp only goes so far.

I thought it was a pretty awesome mirror too, Gregg. As for the grassies, man you never know what you're going to get. Some are dogs and some will give you a good run.

Good point Trevor. But then I would have to explain why I said "son of a %*&%#@" when that clever cast hit the water.

Somehow I missed this one. I caught my first mirror just last month. They are brilliant. And that one you have there is stunning!