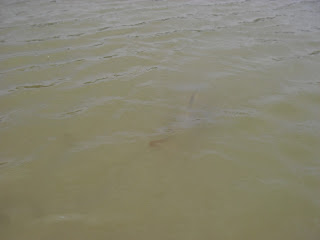 From a stealth perspective, this position behind the carp is ideal since he is unlikely to detect you visually. Well, not right away. But it does present some problems casting-wise - mainly getting the fly in front of the carp without lining him. One option is get the fly forward and to the side of the fish, hoping he turns on it. Not a bad strategy and a workable option. The problem with this approach is that the leader still often lands very close to the carp. Carp don't like this. Another option is simply to move and give yourself another casting angle. But this often alerts the fish to your presence and is a less viable choice. Most times you're stuck making the cast right then and there where you stand.

The answer I've found is a side-arm curve cast. I always think of Dan Quisenberry when I make this cast. Remember that guy?

Anyway, most of my casts on this water are side-arm and oriented horizontally.  Lifting the rod to vertical and waving it around is a great way to spook the hell out of some carp here. So it has to be a side-arm curve. This is a useful cast because done correctly, the fly is in front of the fish but the leader and fly line are well away from him.

Not too hard to pull this off. Basically make a side-arm cast and make the stop a little harder than usual on the forward cast to the kick the leader over to the left (assuming a right-hand caster). Takes some practice, but it doesn't take long to get a feel for it. I've been practicing it quite a bit and it's starting to pay some dividends. Nailed a couple of fish yesterday with it, including the one at the top of the page.

A few notes on this cast, followed by some pics:

-Accuracy is the tough part. You'll actually be aiming your cast a few feet to the right of the target. The leader should kick left and put the fly in front of the fish. The main thing to remember is to always be long. In other words, if you're going to miss - miss long and well in front of the fish. If you miss long, you can sometimes drag and drop the fly into the target zone.If you miss short, the leader will land on the carp when it kicks over. Carp don't like this either.

-If you're having trouble getting the line to kick over even with the hard stop, shorten your leader.  If you shorten it enough, you won't be able to prevent it from kicking over. In fact, to get a good feel for this cast, take your leader completely off of the line.  Without a leader, the fly line will kick hard to the left on a side-arm cast. This is what you're going for. Put the leader back on and go for that same kick. I routinely use 11 - 12 foot leaders in my carp fishing, but have recently backed off to 8 - 9 foot leaders to accommodate this cast.

-When practicing, don't use a piece of yarn as the fly.  Use an actual fly, clipping the point off. The weight of the fly will help straighten out the leader after it kicks over. Yarn doesn't have enough weight to do this.

Great cast to have in your bag of tricks.
Posted by Ty at 1:15 PM

OK, so what does it mean when every single cast hooks hard left at the tippet and I can't seem to stop it. Only happens when I am exhausted at the end of a long day or series of days...

Good stuff Ty. My typical presentation there is to drag and drop a two fly rig. Use the back fly as an anchor and pull the lead fly across to the other side of the fishes head. When done right. You end up sinking one fly on either side of the tailer, with leader etc. perpendicular to the fish. Getting behind them like that is my favorite angle.

Hard to say without seeing you cast, Trevor, but whatever you're doing is happening at the very end of the casting stroke since only the last foot or two of leader is hooking. Based on what you're saying about the circumstances, my guess is that your wrist is collapsing a bit due to fatigue and turning inside when you snap your wrist to make the stop on the forward stroke. This will cause the rod tip to hook inside and this little hook will show up at the end of your leader. This will be very subtle, but I bet you'll notice it right away if this is indeed the problem. Next time you see the hook, focus on keeping the rod tip moving in a straight path right to the target. Let me know if that turns out to take care of it.

Ooooh man, John, that sounds kinda deadly. Gonna hafta try that one. I like getting behind the fish like that too, but man I've lined a lot of fish until I started putting a curve on them.

Good stuff indeed. Carping sounds nice to me always.I do love Carp fishing.we usually do carping and Carp fishing in our pond at my village. I have a lot of sweet memories with carping in the pond. Thank again for this nice post and Blog.

Good and well written and illustrated Ty!I also find that, as in trouting, water spray over close fish buggers them greatly. I have been doing this many years as by necessity I am low and must be close to the fish, or them to me, often.

Hey thanks CF. Appreciate your stopping by and commenting.

One hundred percent correct, Gregg. I probably spook more fish with water spray during the cast than anything else. I try to remember to make a couple of false casts well away from the fish before I deliver to pop the water off of leader and fly. Seems I forget to do this more than I remember though.

Excellent write up Ty. Lots to learn to stalk these fish successfully.

Trevor, it sounds like a tailing loop. I tend to get them more towards the end of the day also. They are usually the result of turning my wrist as I deliver the line.

Great suggestion. Although I come up on a lot of fish in that position, I'm not usually in a situation where I can even do a back cast. I'll make sure to keep that in mind the next time I am, though. John's technique sounds absolutely KILLER.

Thanks Mr. P. And yup, LOTS to learn.

Judging from the photos on John's blog, his technique is killer, Roydn. He catches some ridiculous carp. Beasts!