"Dealing with the lumber." or "In the lumber, dealing."

The scenario today was this - several carp milling around in the back end of this small pocket off of the main lake. Not much wider than my canoe and both banks littered with downed brush (or lumber as Miles would say). Maybe two feet in depth throughout. I am fitted for disaster with a 5x tippet and a willingness to put a fly on these fish despite the circumstances. My first cast is off but turns out to be close enough. A loner breaks from the group and casually picks the fly up. As expected, the carp makes for the lumber on the hookset and dives hard into the branches. And I let him. Encourage him, even. I lower the rod tip and feed him line. He weaves in and out of the woody maze and then stops, I assume, to consider the situation. 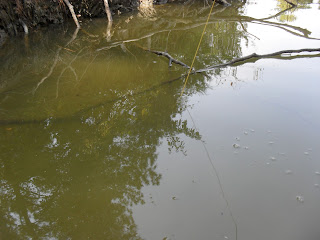 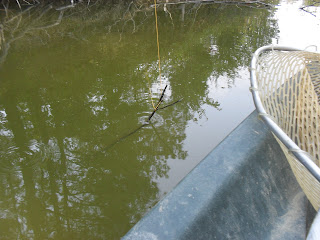 At this point I slowly begin unraveling the fly line from the branches while the fish sulks, pausing here and there to reel in line gained. As I near his lie, the carp moves deeper into the jumble of limbs, taking back a few feet of line each time. We repeat this process several times. Each time he moves further into the brush, he also moves closer to the open water of the main lake. When we finally reach the end of the line of brush, he bolts for open water and loses his advantage. The end game follows fairly soon thereafter. 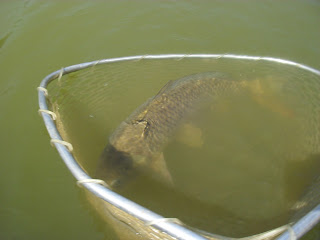 This year I've lost several fish trying to turn them from submerged obstacles like downed trees, etc. Trying to turn a hot carp during its initial burst is often a losing gambit, especially when a light tippet is involved. And wrestling a carp from the brush rarely works. In both instances the tippet usually gives.

So I've been rethinking this approach and have been experimenting with another tactic. Rather than attempt to turn the fish, I just let him run into obstacle. I let him run the fly line into the limbs and then begin the process of working it free after he stops and settles down. If I'm patient and constantly keep untangling the line and moving toward the fish, eventually he'll break for open water where I have the advantage. I have been astonished at how often this works.

-The fly line bears most of the pressure and abrasion from the branches, not the leader/tippet.

-Even when a fish is in the brush, there is enough spring and bounce in the twigs and branches to protect the tippet to some degree.

-Given the spongy mouth of the carp, the hook is unlikely to fall out as you give the fish line and slack as he moves through the obstacle.

-With the pressure suddenly released as you play out line, the fish often stops his run short and hunkers down.  This also protects the tippet.

-As long as you're patient and continue to work the line through the brush, the carp will eventually make a break for open water.

Anyone else use this tactic? I've landed more than a few fish with it in recent weeks in some very brush-centric situations.

Thanks Mr. P. It doesn't always work out and you lose the fish anyway. But it's a nice option to have in your back pocket.

I use 5X not at all. Do you have to to insure a strike there? Wait, last trip were slurping carp, I tried with a wet/dry small fly on 1X, no takes but not sure it was my tippet. That was something I have tried, and it has worked, but also not. I prefer to stop them if possible but I agree with Mr.P, you adapted well. I loved that water also!

I have used similar tactics on letting them go in super heavy current where I don't have a chance hoping they come back. It works sometimes. Never tried for lumber, that is a very cool thought. 5x is not in my vocabulary though...

I prefer to stop them as well Gregg, but if the take is within a few feet of the brush, I know I'll have a hard time turning the fish that quickly. So I'll let him run. Sometimes it doesn't work. But it works more often that I expected.

Ha ha. I figure 5X isn't in most carper's vocabularies! I have been using it out of necessity lately. Been using very small flies on my local carp. More on that later.

Good work but 5x tippet is crazy talk! 0x or 1x for me. Put the wood to em before they put the wood to you! That's my motto (and probably why I've broken two rods this year on em as well).

5X is crazy talk where you fish, Miles! A tippet that light wouldn't stand up for two seconds to the fish we caught in July. Man, I gotta get back up there soon.

Come on up! I know where some big ones are hanging out now.

Come on up! I know where some big ones are hanging out now.

First chance I get I am heading up that way!

I have been known to carry limb-loper shears in the canoe. The tool has helped bring a number of carp to the net. The amazing thing is "they will bolt into that shoreline brush" not sometimes, but every time.

Now that is a great idea, JM. Gonna try that for sure.

And yup, every single time.

â€œThis gives these people a new much-needed springboard to market their particular ability on first phase in their occupations,[url=http://www.coachroomjap.com/]コーチ 財布[/url], which could become a significant plus memorable encounter. â€œ

Your competition is lenient with men and women outdated seventeen for you to [url=http://www.coachroomjap.com/]コーチ アウトレット[/url] 21 years old coping with the main town, [url=http://www.orobiancoshoppu.com/]オロビアンコ 新作[/url],as well as the 5 prosperous poets can do master-classes having Dame Vivienne and also modern-day poet Greta Bellamancia. Poets could report the verses on the Driveway solar-powered â€˜Aâ€™ Business, [url=http://www.koukyuuhermersja.com/]エルメス バッグ[/url],and do your family portrait shoot in addition to small roll film.

This task culminates with all the poets performing inside October to your celebrity [url=http://www.viviennewestwoodjap.com/]ヴィヴィアン 時計[/url] poetry reading night time hosted by way of Dame Vivienne from Keats Residence,[url=http://www.koukyuuhermersja.com/]エルメス バッグ[/url], the previous property with poet Bill Keats. This Weather factors War, started by means of Dame Vivienne, promotes persons for taking motion on [url=http://www.viviennewestwoodjap.com/]ヴィヴィアン バッグ[/url] weather alter through accomplishing basic elements into their daily lives that will change lives.
http://www.assurances.lu/inscription-newsletter#comment-30827
http://kmd.com.tw/Forum/posting.php?mode=newtopic&f=2&sid=
http://www.swkod.com/index.php?action=post;board=4.0
http://www.mynquetv.com/?page_id=34#comment-67
http://601771.xobor.com/new.php?&forum=2

Aw, this was a really nice post. In idea I would like to put in writing like this additionally – taking time and actual effort to make a very good article… but what can I say… I procrastinate alot and by no means seem to get something done.

I’d have to check with you here. Which is not something I usually do! I enjoy reading a post that will make people think. Also, thanks for allowing me to comment!