My carp runneth over 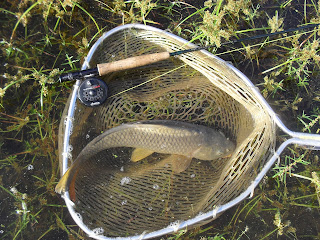 ....and darn near spooled me.  This dude had some starch in his shorts and just about scorched the reel off of that 5 weight. Nice.

Several significant rain events over the past couple of weeks have recharged the flats with a few inches of fresh water and the carp have moved back up in decent numbers, which seems to support the pattern theory I mentioned a couple of posts back.  Water temps are in the seventies and the fish are clearly in the mood to eat. Took a few cruising commons like the one above on an unweighted MF'er.

An added bonus to the rain is that several stretches of the flats are again underwater after being high and dry for much of late summer. Quite a bit of foliage filled in during the dry spell and all of that greenery is now submerged. Grass carp like that. The grassies have nosed up into all of this suddenly available forage like hogs at a trough. They're tough though. Even more so than usual.  Grassies are near impossible to take on a fly when they have plenty of readily available green stuff to feed on.  At least around here. They beat me down like a rented mule and seemed glad to do it. 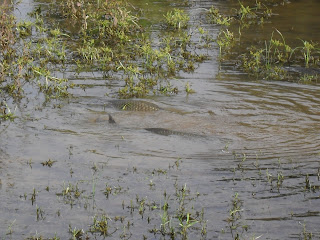 Wow, it rains, the flats fill in with water and your Carp return. Like Erin, I'm jealous. That won't happen here until next year.

70 degree water! We won't see that anywhere here until May. Lucky you. I was watching the news lately and it seemed you may have had rain, and you did, how fortunate. That rarely matters here, it's snowpack in the mountains that fill our rivers, and by extension, irrigation reservoirs, large and small. Nice fish on the 5 wt! Love/hate those grassies! Hope this lasts for you.

Starting to wonder just how long your season can really go? Sounds like you are a good month and a half behind us in CO.

Thanks Erin. We went through that "no rain" thing a couple of years ago. Not good. Hope you guys get some soon out there.

Yeah, Mr. P, we're pretty lucky right now. Eventually the water temps will come into play but we should have some good flats fishing for a few weeks.

I ain't complaining Gregg! Going to enjoy this warm water while it lasts.

I don't know Trevor, but I aim to find out this year. I plan on fishing hard for carp straight through winter this to see what happens.

Binary Options is the way to [url=http://www.brokersring.com/]make money[/url] securely online

So, even although we are listening, we have to make certain that we understand what is being said.
Most individuals will tend to go out and purchase a brand name
new deck, nevertheless.