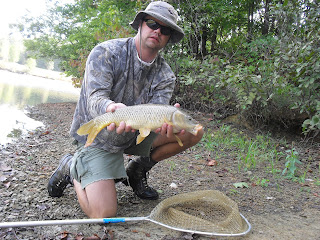 The carp have (mostly) moved off of the flats over the past few weeks and are oriented to areas where they have immediate access to deep water.  Initially I thought a spate of back-to-back-to-back-to-back cold fronts pushed them out of the flats area, but I see now that this is incorrect.  I have in the past attributed the periodic abandoning of the flats to changes in water temperature, but after considering this under various seasonal scenarios I now think the main reason for the move is actually water levels.

This time last year, for example, these same flats were loaded with tailing carp. This year though there are very few carp here and it seems clear that water temperature is not the culprit. If anything, the temperatures are dropping right into the carp's wheelhouse as far as active feeding goes. The only real difference that I can see between September of 2011 and now is that water levels were considerably higher in 2011.  Bottom line - it's incorrect to say that this is a temperature pattern. It's actually a water level pattern.

I suspect this is a security deal. Even though they have an entire reservoir to their backs, these fish feel a lower level of security on the shrinking flats.  This is further evidenced by the fact that any stray carp on the flats right now is guaranteed to have his full schizo on and be wary as hell.  I've managed to stick a few of these fish, but only after dropping to a #18 unweighted pheasant-tail and 12' 5X leader. Even then most of them spooked the instant the fly hit the water.

So I checked an area that I fish infrequently. An area where I only occasionally see carp. An area that is mostly a shallow shelf along the bank with rapid drop-offs to deeper water near by. And there they were. In good numbers. Feeding like crazy.

Good on you, sleuthing it out!

Something to think about here-abouts. I have similar difficulty finding carp in stillwater in the fall, perhaps I am looking in the wrong spots.

Thanks Erin! Hopefully that's a consistent pattern for them.

I'll be interested to hear if you find a similar pattern out there Trevor.

I knew that was coming by your foreboding comment in "Lumber..."
I went yesterday and had chances at my nuerotic carp. I thought to use that (soft hackle,)or this, (Ty recommended #20 fly or small PT,) but my mind wouldn't wrap around those things. They may have helped. I suppose I carry all the flies I do simply for show then. You're doing well with your mind in the right place!

I know what you mean, Gregg. I have a hard time convincing myself to use the smaller flies. I much prefer the big stuff and the heavier tippets. After a coupla dozen or so spooked carp though, I usually go ahead and make the change.

I think I'm one of the few carpers who can get away with those 5x tippets. The fish that you and Montana and Trevor catch are way too big and strong for light stuff like that. And yes, I'm jealous.

thanks for the info.
see the link.