Good to the last dropper.


Educational weekend on the carp front.

-I spent much of my time experimenting with a dry and dropper rig, specifically a hare's ear dropped from a Turck's Tarantula. I have been thinking alot about this combo and its possibilities for cruising carp. As the weather cools, cruisers seem less receptive to a fly dropping on the dinner plate and often steer clear. My thinking with the dropper is that I can lead the fish a bit more and reduce the risk of spooking him. He comes up on the nymph suspended in front of him rather than having it drop on his head. Results thus far are promising. 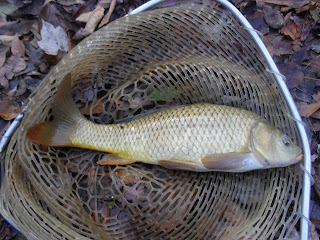 -I found several pods of cloopers in one arm of the reservoir. In every instance the surface of the water was covered with a mat of small seeds, or something, blown from nearby trees, and the carp were feeding on this. I tried the dropper combo here with some success. I hoped I might get a take on the tarantula since these were rising fish, but that was a no go. In fact any cast in the immediate vicinity of these fish would put them down. But a cast that put the dropper in the cruising lanes between the mats of seeds would occasionally get a take. Hit and miss with no consistency. But it would work if you could summon the patience to stick with it.

-I fished each day from late afternoon to dark. As dusk approached, significant hatches of large cream midges came off.  Also about this time I noticed large mud plumes boiling up here and there near the shore. These were not small isolated plumes like a single fish makes. These were large strips of stained water, the kind of thing you might see from the wake of a boat when it passes an exposed and eroding shoreline. And in the middle of this, creating it in fact, were numerous carp. They were difficult to see because of the dingy water, but they were moving around quite a bit and I got glimpses of them as they finned around, their sides flashing as they turned on their sides to intercept rising midge larva. At least I think this is what was happening. I don't think the hatch and this aggressive feeding behavior occurring at the same time is a coincidence. The dropper did not work on these fish, but a stripped nymph did. A couple of times anyway. 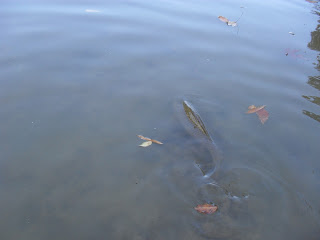 -I figure I should make it a point to fish until dark more often. This is something I rarely do when I'm fishing for carp.

-One final note on the dropper. Just before I reeled in and headed back to the ramp, I found an isolated carp crawling a steep bank. I dropped the flies in a few inches ahead of him and he, unbelievably, came up to the tarantula. But he didn't take. So I gave short strip. He followed but still didn't take. I stripped a few times hoping, I guess, to imitate a fleeing insect. The fish followed briefly, but then sank out of sight. I knew that I had overplayed my hand. So I sat and waited for him to show again. Ten minutes later he was back.  I cast and he again rose to the dry. This time I went for subtlety and gave the fly the slightest of twitches. And he sipped it right in.  I nearly fell out of the boat.  My immediate concern was a large pile of brush nearby and of course he headed right for it. And then the fly pulled out. Just pulled out and he was gone.

Awesome stuff Ty. I've never gotten any of our local carp on a dry fly.

Keep up the good work.

Good stuff Ty. I think the season is over for me up here. I'm now relegated to targeting lowly secondary species (steelhead).

I often place my indicator and egg or whatever in passing lanes, more often than not actually. My carp who see many people, bait fishers, don't like the commotion of a cast, or movement. They suddenly come upon it with me as still as a heron. I think though I'll try a large fly sometimes, have given it a thought, as my "Hopper" part of the dropper. For that matter, in my arid land hoppers are everywhere but I have not had a take on one yet, and I've tried. I will try a trout sized nymph this Wed. I promise. My carp have shown odd fast movements as well, don't know what's up.

Yeah, me neither Brent. I thought I had my first carp on a dry when he ate that tarantula. Not sure how I screwed that up.

I'm going out to buy a gross of those tarantulas myself, Trevor.

Thanks Miles. Having trouble feeling sorry for you though. You ended the season with some friggin' PIGS up there. Looking forward to June!

Actually Gregg, your comments over the past few months are probably responsible for getting me thinking about this dry/dropper scenario more than anything. You have a unique approach to this whole carping deal and I pay very close attention to what you have to say.

The next time I read a blog, I hope that it doesnt disappoint me as much as this one. I mean, I know it was my choice to read, but I actually thought you have something interesting to say. All I hear is a bunch of whining about something that you could fix if you werent too busy looking for attention.

You made some decent points there. I looked on the internet for the issue and found most individuals will go along with with your website.