Last weekend I found a pod of carp rising to the same seeds I saw on the water a few weeks ago in this previous post. (A little research revealed that these are probably seeds from the sweetgum tree, the bane of every barefoot kid here in the South during summer).
﻿
﻿


I was more or less appropriately rigged for this scenario with a two fly set-up consisting of a #10 Elk Hair Caddis and a #14 Hare's Ear running point. Sweetgum seeds are tiny and the EHC of course dwarfed them, but this was not a factor. The seeds tend to clump in the surface film and carp slurp these clumps down rather than bother with the individual seeds.

Although not a perfect match, the EHC was apparently close enough. Several carp rose to it. Not one or two but several, which sounds like a wonderful thing. Except that they could not eat the fly. Absolutely could not eat it.

The carp would open its mouth, the fly would go in. The carp would close its mouth, the fly would pop right back out. The fish would follow, opening and closing, the fly popping in and out, until finally it gave up and moved on. Sometimes the fish would make a couple of attempts and then back off a bit to have a good long look at the fly. Then he would give it another go or two before leaving it alone.

And yes, I tried several times to set the hook. The fly always pulled out, often without even spooking the fish. Finally, I too gave up. I resorted to casting and watching the fish take the fly without setting the hook. It was an interesting scene to observe and honestly kinda comical.

My conclusion is that the fly was too bouyant, and the inferior position of the carp's mouth makes it difficult to eat a fly sitting up high on the film. The fly enters the carp's mouth riding on a cushion of water. As it closes its mouth, the water is expelled and the fly rides this same cushion right back out. This happens quickly. The fly in this situation usually does not go very far into the carp's mouth, sometimes not even passing the lips completely before it is pushed back out.

At least that seemed to be what was happening. This suggests that a dry with palmered hackle may not be the best choice. A dry that sits down in the film like Turck's Tarantula is probably a better option. That said, I have had two takes on the tarantula recently and missed them both. Yet another nuance to consider when fishing for carp.

I did manage one fish on the Hare's Ear, so the skunk was avoided. That makes 12 straight months with carp brought to hand. Not that I'm counting. 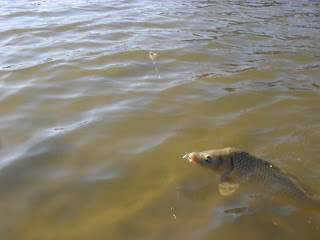 Ty, you think maybe it was the tippet to the trailing fly that was causing the problem? Maybe the line being on both sides of the fly is effectively pushing against the lips and keeping the fly out of the fishes mouth? Did you try the EHC without of dropper?

Very interesting and detailed report, Ty. Although I've never caught a carp on a dry fly, your hypothesis makes sense...kind of like the reason why a fly swatter is designed full of holes to prevent an air cushion from pushing its quarry out of the way.

Oh that is excruciating! No clues here. A stumper.

Sounds like DFrasier may be on to something. I like his line of thinking. I was wondering at what angle you were to the carp. I would think a fish facing away from you would be much more likely to get hooked.

Dan, I agree with Jay. You may be onto something here. I honestly didn't give that much thought but you make a lot of sense. I'll definitely take the dropper off next time to see if that makes a difference.

Brent, even if the dropper is part of the problem as Dan suggests, I still think that cushion of water under a bouyant fly is a piece of the puzzle too. Lots to consider.

Excruciating. Yup, that's the right word. The good news is that it's pretty clear carp will take a dry fly, or attempt to.

Jay, I like Dan's thinking too. Interesting point about which way the fish were facing. Pretty much all of them were facing to my left or right. I don't remember any of them facing away. Could be another factor.

Ty
Don't that just drive one crazy when you see the taking of the fly and in an instance it's out of their mouth. I have seen the same thing happen so many times with trout. Finally you just try another place as you did. Thanks for sharing

Too cool! Check out Barry Schrader's Drifting the Prairie Ocean. he had carp absolutely nuts after flower petals and rose multitudes of fish on a stimulator for no hook ups, well, one brief one. I have caught fish on a dry but it was a seed fly, hackle stacker style, #14, and it was sucked in no problem. What you had was fascinating! Bully for the December fish! We have a major cold spell coming and I need my XMAS fish!

Yeah Bill, it did kinda drive me crazy for awhile.

Thanks Gregg! I'll check it out for sure.

It is great to have visited your website. Thanks for sharing useful information. And also visit my website about health. God willing it will be useful too