Northwest Georgia received a significant amount of rain this weekend, around 2 inches by some counts.

Multi-day rain events around here often bring the carp up into the shallows.  No news there, of course. That happens in a lot of places, and not just with carp.  The prevailing theory seems to be that the rain washes a few more food items into the buffet as it scours the shoreline and drains into the lake.


I'll buy that, if for no other reason than after heavy rains I often see carp in places where they usually aren't found, nosed up tight to the water's edge and in serious feeding mode.

Like yesterday. The carp were on a flat that, for whatever reason, is typically not on their scheduled daily rounds. I have, for example, searched this flat thoroughly over the past couple of weeks, seeing no carp. Not one. Then yesterday, following the deluge, they were there. 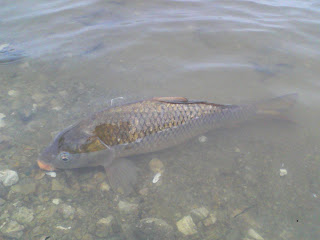 And I caught them. Not all of them but enough to count the day as an unexpected late-fall bonanza.

As I landed these fish, I realized that there is a good chance that these were my last carp of 2012 and felt, weirdly, a twinge of sadness. If you're not careful you can get sentimental about that sort of thing, as if a December carp is somehow more significant than, say, a February carp.

Still, I took a few extra seconds to admire these fish. They may or may not be my final carp of 2012, but I couldn't overcome the urge to savor them just a bit. 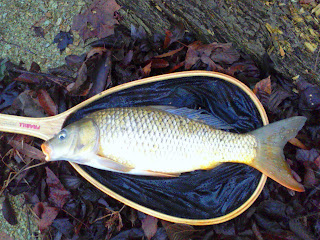 Nice work Ty. Great pics and beautiful fish. That said, you might have to take the WHOLE month of January off?? Must be rough.

Good stuff Ty. Keep it up.

So do you really have a true down time? I mean for months at a time as i may. I realize you have snow and cold but, you it seems you could find carp most otherwise. In any case, good job, glad for you.

Thanks gents. Appreciate the comments.

The plan is to hit it hard in January and see what I can come up with. I definitely don't have the down time that you Yankees, um, I mean Westerners, have out there. Even in the dead of winter we'll get a few warm sunny days down here.

What's up, after reading this remarkable article i am too delighted to share my know-how here with mates.
my web page - bootszubehor online

First of all I would like to say fantastic blog! I had a
quick question in which I'd like to ask if you don't mind.
I was interested to know how you center yourself
and clear your head before writing. I have had difficulty clearing my
thoughts in getting my thoughts out there. I truly do enjoy writing however it just
seems like the first 10 to 15 minutes are lost just
trying to figure out how to begin. Any suggestions
or hints? Appreciate it!

Hello there I am so happy I found your website,
I really found you by accident, while I was looking on Yahoo for something else, Anyhow I am here noww and would just
like to say cheers for a remarkable post and a all
round enjoyable blog (I also love the theme/design), I don’t have time to read through it all
at the minute but I have saved it and also added your RSS
feeds, so when I have time I will be back to read much more, Please do keep up the great work.


thank you very helpful article. allow me to join to share health articles with your article hopefully useful.

His article is very helpful at all thanks

You have to keep on being enthusiastic and don't give up, keep it busy, hopefully it will pay off