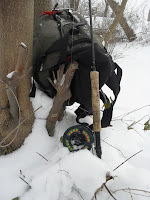 I have come to the infamous Toilet Bowl stretch of a certain carp-infested Michigan river with the equally infamous Miles. As you might guess, this water is not what you would call pristine. I think "extremely degraded" was the term I saw in an article describing this area.

It's snowing. Or rather it has snowed and is snowing some more, a thing that I would normally piss and moan about except that I'm distracted by the large torpedo-shaped shadows slowly cruising the edges of the Toilet Bowl.  Carp.  Big ones. And, it goes without saying, tough. These fish are no push-overs.

Accordingly there was a beat-down, with the carp doing the beating. We only recorded one take between the two of us. Miles stuck a nice fish that promptly broke him off and that was that. My only action of the day was a foul-hooked mirror carp that broke my 9 weight.

If there was good news, it was that neither of us had to run The Gauntlet.  That would come on Day 2.

Carp at the Toilet Bowl hang out in a hole that is largely inaccessible, meaning there's no place to land them once hooked. When you stick a carp here, you must make your way to the other side of the river to land him. To accomplish this, you climb a flight of stairs, traverse the 200 ft cat-walk that spans the river, dodging joggers, hikers, etc. along the way while at the same time maneuvering the rod and line up, over and through various obstacles including - I am not making this up - a building. Once you have lifted/finagled your line around these obstacles, then you can make your way down a steep (and extremely slick I discovered) hill to stand among a jumble of break-ankle boulders and land your fish, who has been waiting patiently out in the middle of the river for you to run this gauntlet.  The Gauntlet.

Day 2 is a solo day for me, Miles having previous obligations. Given the beating on Day 1, I changed tactics and took a more subtle approach. I added three feet of 8lb flourocarbon tippet to my leader and tied on a #10 unweighted hare's ear rather than the larger, heavier flies we used the previous day.

It worked. I put the hare's ear above and ahead of a cruising carp, where the current brought it to him. I couldn't see the fly, but when the carp turned suddenly I set the hook. A heavy weight throbbed up through the line and it was at this point that I truly began to consider the challenges of The Gauntlet. It was also at this point that I noticed that the upper two feet of my 7 wt. was missing. At first I thought the TB had claimed another rod in addition to the broken 9 wt from Day 1. However closer inspection revealed the rod was not broken. The tip section had apparently come loose and simply slid down the line when the big carp bent the rod double.

I'll spare you the complete play-by-play, but here are several things that occurred in the ensuing minutes after the initial hook-up:

-The fly rod, its length now reduced by two feet, was not long enough to work the line around the obstacles of The Gauntlet. I got around this by feeding the carp slack and allowing him to run far, far out into the middle of the river. This increased the angle of the line to the rod so that I could, barely, lift the line over the obstacles as I crossed the cat-walk.

-Getting the line over the final hurdle, the building, required multiple trips up and down the aforementioned steep snow-covered hill, working line along the roof a few inches at a time. I fell down a lot during this. A lot. Several passers-by stopped to watch. Some didn't stop at all and quickened their pace, apparently not comfortable in the presence of a frenzied madman wielding 3 pieces of a four piece fly rod.

-I finally freed the line and began working the fish in. Amazingly, the tip section of the rod had somehow worked itself back up the line and was now frozen to the long length of line bobbing in the air between me and the point where it entered the water. Eventually it came within arms length and I reattached it to the rod, finishing the fight from there.

-I landed the fish - see below. Behind me in the distance, on the other side of the river, you can see the opening to a culvert (or Poop Chute as Miles calls it) that dumps into the Toilet Bowl. I hooked this fish a few feet in front of that culvert. We came a long way together baby. 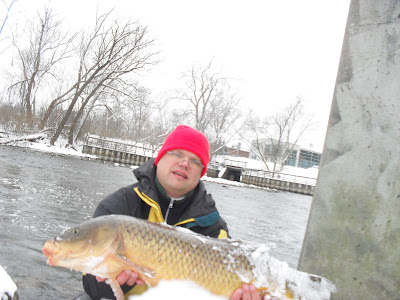 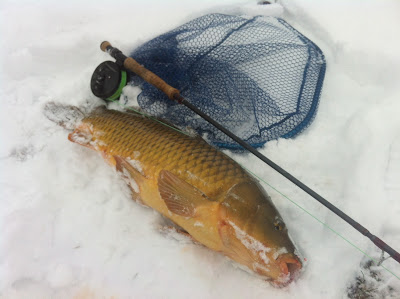 Who needs winter steelhead when you can probe the depths of the toilet bowl hole at the mouth of the poop chute for bruiser carp!

Man, sorry to hear about your 9-weight, Ty....but congrats on making some pretty sweet lemonade and landing that pig of a carp despite the obstacles.

Where is this located?

Miles, you would not believe the number of folks who have said to me "You guys were fishing for carp instead of steelhead???" Kinda funny.

Thanks Brent. I think Orvis is getting tired of me breaking their rods.

Yup Gregg, my first snow carp. And a memorable one at that.

Hey Samuel, I don't often give specifics on locations unless it's my home water. Miles took me to this location and would probably kill me if I outed it. Hope you understand man!

Ty
Unbelievable size carp from some infested waters, I thought carp was only active in the warmer months but you have proof they can be bagged even in the coldest months. My hats off to you for landing some beast here. Thanks for sharing

Thanks fellas. Appreciate the comments.

Just re-read this for the dozenth time. Cracks me up still TY.

Everyone loves it whenever people get together and share thoughts.
Great site, keep it up!

I will bookmark your website annd take tthe feeds also?
I'm glad tto seek out so many helpful information here iin the putt up, we want develop
more techniques in this regard, thank you for
sharing. . . . . .

Thank you for sharing the information, may be useful :)

Thank you for sharing the full text. And allow me to share any posts that contain this health information. I believe this is useful for us. Thank you :)

Your blog was always neat and clean and also informative. Visit for
Website Development Company in Delhi

Everyone loves it whenever people get together and share thoughts.
Great site, keep it up! HIV Specialist Doctors

Thanks for providing such a great Information, you can see, we also provide
Peptide Synthesis